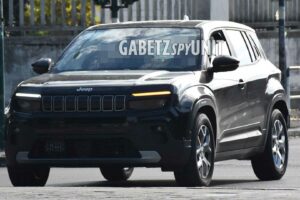 At the Paris Motor Show last month, Jeep fully revealed the Avenger. Bound to be sold in Europe, Japan, South Korea, and other markets outside the US, it’s the first all-electric Jeep, paving the way for the automaker’s foray into the EV era. However, the model isn’t exclusively electric.

Buried deep within its press release, the 2023 Jeep Avenger 1st Edition is said to be also available with a turbocharged gasoline engine. This is the first time we’re seeing the Avenger with an internal combustion engine, courtesy of these spy shots from Walter Veyr.

Smaller than the Jeep Renegade, the ICE-powered Avenger doesn’t exactly differ from the fully electric models except for two things: it doesn’t have the “e” badge on the grille and it has a tailpipe. The spied test unit also doesn’t have the yellow sticker normally seen on prototypes equipped with electric motors.

Jeep didn’t disclose any detail about the non-electric Avenger. In fact, the automaker only mentioned its availability once in the fairly lengthy Stellantis press release. All we know is that it is only available in Italy and Spain, and that pre-booking is now open until the end of this month for those interested.

As for the EV, Jeep has detailed the powertrain setup of the 2023 Avenger. It’s powered by a single motor that makes up to 154 horsepower (115 kilowatts) and 191 pound-feet (260 Newton-meters) of torque.

This electric motor draws juice from a lithium-ion 54-kWh battery pack that’s good for 400 kilometers (249 miles) in the combined WLTP cycle. If used within the city only, it should be okay for 550 kilometers (342 miles), with the ability to recharge from 20 to 80 percent in 24 minutes when using a 100-kW connection.