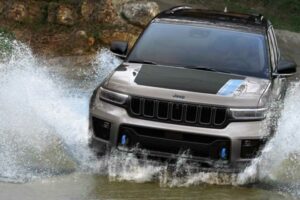 Jeep is working to accelerate the introduction of 4xe plug-in hybrid versions for the Wagoneer sub-brand, which consists of the 2022 Jeep Wagoneer, the 2022 Grand Wagoneer, and soon long-wheelbase L models of both. Jeep has promised a zero-emissions vehicle in every segment by 2025. But the large Jeeps should get their batteries and electric motors sooner rather than later, with announcements expected this summer.

The team is working to accelerate the timeline. The 4xe versions of other Jeeps are proving surprisingly successful. “If I could do some magic, I would bring it tomorrow,” Global President of the Jeep Brand Christian Meunier tells MotorTrend.

Sales of the Jeep Wrangler 4xe have exceeded expectations globally since it was added for the 2021 model year, and it was the best-selling plug-in hybrid in North America in the first quarter of 2022. The 4xe accounts for 25 percent of Wrangler sales in the U.S. Off-road enthusiasts love its silent performance, and on-road they embrace the improved fuel efficiency.

Next up was the 2022 Jeep Grand Cherokee 4xe with its 375-hp and 470 lb-ft of torque making it the Grand Cherokee lineup’s most powerful option. The next-generation Jeep Cherokee will also have electrification but is not expected for a few more years.

In Europe, buyers can get a Jeep Renegade 4xe, as well as a Jeep Compass 4xe. At a promotional event for Jeep’s Jurassic World collaboration, Meunier told media that Jeep will stop selling vehicles with only internal combustion engines in Europe by the end of 2022, building on the popularity of its plug-in hybrids and increased demand for EVs in Europe in general.

Jim Morrison, head of Jeep Brand North America, previously told us it is not necessarily easier to add a new plug-in hybrid to a new model like the Wagoneer as opposed to an older model like the Jeep Gladiator pickup truck because Jeep is working on dedicated platforms for a smoother rollout.

And Stellantis has a number of new platforms for the all-electric vehicles it will be rolling out across its 14 brands, including Jeep. Jeep’s first pure BEV is a small lifestyle Jeep -sometimes referred to as a Jeepster. We are promised we will get more information this summer, and perhaps see it in sheetmetal. The urban Jeep is launching in the first half of 2023 and was developed on the STLA Small platform, one of four dedicated electrified architectures. Despite being small, Jeep sees a market for it in North America. Stellantis has promised 25 EVs on sale in the U.S. by 2030.