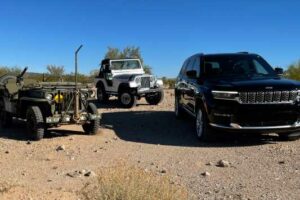 Few car names have become as ubiquitous as Jeep – a term that has been used around the world to describe a four-wheel-drive vehicle.

In fact, as former boss of Jeep and Fiat Chrysler Automobiles, and Auto Express Hall of Fame inductee, Mike Manley told us back in 2016, the word Jeep has become far more important than that. “Here in the US when kids are learning to write the letter J, they use Jeep. What other brand gets to kids at that age?” Manley said.

Only a matter of months ago Jeep celebrated its 80th anniversary. It was back in 1941 that the US Army asked 135 different companies to create a four-wheel-drive reconnaissance vehicle, with the contract eventually going to Willys-Overland. The term Jeep is said to have either come from slang used by American GIs to describe new recruits or new vehicles, or from the vehicle being referred to as General (or Government) Purpose, with the GP name slurring into Jeep. Either way, the name stuck.

After the war, Willys built the CJ, or Civilian Jeep, the precursor to today’s Wrangler model. A trademark for the name Jeep followed, as did a long and complicated history of ownership. Willys was taken over by Kaiser Motors in the early sixties, before AMC (American Motors Corporation) took on the ailing business in 1970.

Even Renault got involved with investment in AMC in the late seventies, before AMC was taken over by Chrysler in the eighties. Chrysler became DaimlerChrysler in 1998 following a merger with the German giants, who then jumped out of the business less than a decade later.

A period under private equity ownership followed before Italian manufacturer Fiat got involved with Jeep and Chrysler, with the companies folding into what went on to become FCA, or Fiat Chrysler Automobiles.

Then, only last year, FCA merged with PSA Peugeot Citroen to become Stellantis – so now Jeep sits within the same company that also brings you Fiats, Alfas, Vauxhalls, Peugeots, Citroens and many more.

To celebrate Jeep’s 80th anniversary, we headed to the US to put the first and the latest Jeep models together – an original 1943 car and a 2022 Grand Cherokee that’s set to go on sale in the UK later this year.

The 1943 car belongs to Ken Howell, a retired hospital administrator from Peoria in Arizona, who also owns a 1982 CJ. We met Ken at his local car meet where his two Jeeps lined up alongside our Grand Cherokee and a surprise arrival: a pristine 1950 convertible Jeepster.

The Jeepster was an attempt to reach a mainstream market, with a more car-like body over Jeep mechanicals. Production lasted three years, before Jeep stuck to what it knew best, and what we now know as SUVs.

Ken’s Jeep, though, has an interesting story. In fact, it’s not a Willys Jeep, because it was actually made by Ford. In order for as many Jeeps as possible to be made as part of the war effort, Ford was granted a licence to make Jeeps, coming up with the iconic grille in the process; nine slots back then, seven now.

His car features the famous Ford F stamped on the wheelarches and behind the grille, and has been the subject of a year-long lockdown restoration.

“This one is unique and a little special because it was so original,” said Ken. “All of the F-stamped Ford parts that are usually long gone were still there. So due to its originality and its known history, which is really rare for a vehicle, I bought it.

“It’s a real World War II Jeep that actually saw combat – it was an officer’s Jeep. That’s what drew me to the vehicle, even though it was in pretty rough shape. I’ve done everything I can, even with a lot of the accessories I have on it, to keep it original,” Ken explained.

That originality extends to the wire cutter that sticks up right at the font of Ken’s Jeep. Apparently those driving Jeeps during the war used to like folding the windscreen flat – just as you can on today’s Wrangler. The enemy quickly cottoned on to this and used to put wire across the tracks where the Jeeps were driven. The wire cutter was the Americans’ way of preventing… well you can guess what would have happened otherwise.

Ken’s example is powered by Willys’ four-cylinder Go Devil engine that produces around 60bhp – a decent amount back then. But it’s a clever bit of engineering that’s Ken’s favourite feature on his Jeep.

“There are a lot of little things that you’d have to really spend some time to look at,” said Ken. “To give you an example, when the hood’s up and the headlights are facing forward, if you were in the field and you ran into mechanical trouble, the headlight on the left, there’s a wingnut you can unscrew. Then you can swing the headlight up, spin it round and it’s a spotlight on the engine.”

As well as his Willys Jeep, Ken has his 1982 CJ, which he describes as “really the last Jeep that was built from a true military vehicle”. He added: “The CJ is the true iconic modern Jeep – it’s the heart of Jeep and was the longest- running model; it ran from 1955 to 1983. I had a CJ when they were new, so I had to have this one.”

Forty years on from that car, we’re sitting in the very latest Jeep to go on sale: the Grand Cherokee. What does Ken think of the modern interpretation of Jeep?

“There are very few similarities between this and my cars. They still keep that iconic grille, although this car is getting more and more away from it,” he said. “And it’ll probably go further than most off road, too. But it’s a beautiful vehicle. I think the luxury with the leather and the quality, plus the feel and the size, makes this more of a luxury SUV; it seems almost like a Cadillac Escalade.”

So with these three models lined up, from the first to the latest, how would Ken sum up what has made the Jeep name special for more than 80 years? “To me there’s an adventurism to Jeep,” he said. “It’s really that ability to go where the road doesn’t go. Here in Arizona, there’s some beautiful tracks – you can leave here and go all the way to Flagstaff and never be on a road. It’s about freedom and open roads – and sometimes with no doors and no roof! It’s living the American dream.”

Charles Porter is a car collector of some repute, with a garage that houses a couple of Astons plus other classic models from Alfa, Audi, BMW and more. And a couple of Jeeps.

One of the prides of his collection is his 1997 Cherokee 4.0-litre Limited named Sarge, after the Jeep in the movie Cars. Charles bought it in 2010 from the original owner, who’d loved and cherished it. “He had to have five minutes on his own with the car to say goodbye,” said Charles.

Charles paid £2,000 back then and reckons it would probably fetch ten times that now. “When I bought it I was living up in Yorkshire and the winters were pretty grim,” said Charles. “I wanted something that was a classic I could use in wintertime. The Jeep answered all the questions; it had airbags, leather, Infinity sound system and it would go anywhere. And its part in history is that the Cherokee is really the world’s first SUV.”

His Wrangler – an 80th anniversary edition – is a recent addition. “My wife loves it,” says Charles. “We now live in the Cotswolds, which is really Land Rover Defender country – round here they’re ten a penny so we wanted something different. And the latest Wrangler literally has everything: it’s a convertible and comes in ‘Sarge’ green!”

So what’s next for Charles? “I’ve always had a hankering for a Willys Jeep – that’s where my passion for Jeep comes from.”