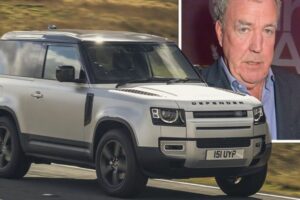 In his review, Mr Clarkson slammed the new Land Rover Hard Top due to accessibility issues and road vision concerns. After initially being excited to try out the new model, Mr Clarkson was soon shocked to find the car came with no rear doors and no windows for its £43,700 price tag.

He added the car was “not even a very good van” after listing a range of problems with the new vehicle.

He said the car’s rear door was a “nuisance in tight spaces” and moaned that the bulkhead “robs a lot of space”.

Mr Clarkson said the vehicle’s blind spots were also “horrendous” due to a lack of visibility out of the rear windows.

Writing in The Times, he said: “It may look like the normal, long-wheel-base five-door car, albeit with steel wheels, but if you open the rear doors there are no seats.

“And you’ll realise there are no windows back there either. Yup. This is a van.”

He added: “It strikes me that what we have here then is an afterthought car.

“It’s as though they made the normal version and then cobbled together a rough-and-tumble working version to silence those who thought the standard car was too poncey and expensive.”

Mr Clarkson concluded if he had the car he would “want to get rid of it as soon as possible”.

However, he did praise the car’s “potential tax benefits” with drivers set to receive favourable rates through salary sacrifice scheme.

According to Land Rover, Benefit in Kind rates start from just £117 for those who pay up to 40 percent tax.

Despite his views, the new Land Rover Defender has already received accolades for its design.

The car was crowned the winner of the car design of the year category at the World Car Awards earlier this year.