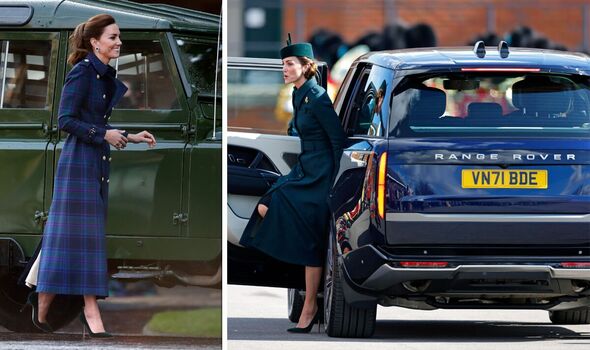 Kate Middleton first drove a Volkswagen Golf when she met Prince William in 2005 at the University of St Andrews in Scotland. The simple blue hatchback was a 1.4-litre petrol model with manual transmission which the future Princess owned for over half a decade.

The car was used by Kate during her studies and later while driving to her job at Jigsaw in London.

In total, the future Princess of Wales closed up 60,000 miles on a car she had owned for six years.

Prince William was previously spotted driving the car when they were dating back in 2005.

Kate was seen driving her VW hatchback as recently as 2007 when she gave the car to her brother James.

He later sold the car on for just £1,400 but the vehicle soon shot up in value.

The VW was later valued at £30,000 by an auction house partly due to the Middleton name being on the vehicle’s logbook.

He said: “Respectable and reliable are two words to describe a VW Golf – some may say this reflects the Princess of Wales.

DON’T MISS
POLL – Should pavement parking be banned across the UK? [HAVE YOUR SAY]
Drivers urged to wear gloves when pumping fuel to avoid illness [SHOCKING]
The UK’s safest cars for 2023 – BMW, Mercedes, Tesla and more [INSIGHT]

“Her VW Golf Mk4 was valued at around £10,000 in 2001, but Kate may have been won over by its safety and comfort that renders it perfect as a first car but also getting from A to B at university.

“Kate moved onto an Audi A3 after graduating but has now upgraded to the Royal Family’s fleet of Land Rovers – a seemingly natural progression for a mum with a young family.”

“They now own the only non-British car in the entire Royal fleet – an Audi R8 supercar.

“Super-fast and with great handling, it offers an unparalleled driving experience that’s ideal for cruising in after a long day of royal duties!”

In 2019, the Princess of Wales was spotted driving an all-electric Jaguar I-Pace, with the Royal Family starting to electrify its fleet of vehicles.

The Royal couple were also seen driving Land Rover’s new Range Rover model, having gotten their hands on the wheel before anyone else at a St Patrick’s Day parade in 2022.

The company has been making cars for the Royals since 1951 and holds three Royal warrants, with the Prince and Princess of Wales known to be fans.

According to OK!, Prince William treated his wife to a top-of-the-range Aston Martin test drive for Christmas, with the pair spotted zipping around Norfolk in the Welsh-built Aston Martin DBX707.

The Prince of Wales took the Welsh-built Aston Martin DBX707 for a spin around the lanes near Sandringham House over the festive period, channelling his inner James Bond.

It is the first Welsh-built production car in more than 50 years and one of many rolling off the production line at the Aston Martin factory in South Wales.

The 90-acre factory – which has resulted in hundreds of new jobs being created – was opened by King Charles in February 2020.