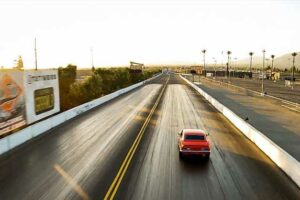 More power. That’s the first thing most enthusiasts want for their custom cars, and the guys from Kevin Hart’s Muscle Car Crew is no different. The crew, known as the Plastic Cup Boyz, took a trip out to Irwindale Speedway to get a better feel of what making more power actually means and take some inspiration from friends met at the Quarantine Cruise.

The options for making more power in a muscle car can be daunting to the uninitiated, so Harry Ratchford and John Clausell are also heading to Lucky Costa’s shop to get the details on how to get the most out of their 1970 Chevelle and 1968 SS427 Camaro.

Related: How do you like to add power? Supercharger, nitrous, camshafts; learn the basics of how it all works with Kevin Hart’s Muscle Car Crew, delve deeper into the science on Engine Masters, and see what horsepower can do on Roadkill. There’s only one place to watch all these great car shows: the MotorTrend App. Sign up for a free trial today!

How to Make More Power in a Muscle Car

Kevin Hart is already rocking 600 ponies with the third-gen Coyote engine in his restomod ’65 Mustang, and “Hellraiser”—the Helephant-powered, all-carbon-fiber 1970 Dodge Charger he commissioned from SpeedKore—makes 1,000 of the snarling tire-destroyers. Harry Ratchford has the beautiful 502 crate motor under the hood of “Quarter Water” making so much power he actually wants to take some out so his daughter can safely drive the ’70 Chevelle. But Will “Spank” Horton, John “Burgandee” Clausell, and Joey Wells all want more power (Joey really—really—needs it). Don’t ask Ron “Boss” Everline about his 1964.5 Ford Mustang, it’s “original” and he doesn’t want to touch it.

At Irwindale Speedway, the Plastic Cup Boyz quickly learned there are as many ways to make more power as there are gearheads who want said power. From nitrous to twin turbos, camshafts to methanol injection, the Plastic Cup Boyz are spoiled for choice when it comes to power-adding options. But with every method of adding power comes a drawback. Good thing they have Lucky Costa to help make sense of it all.

Nitrous oxide is cheap and can easily increase power figures by 50 percent if you pump enough into your intake, but once the gas bottle runs dry, all that performance is gone. Engine and induction parts like high-lift camshafts, high-compression pistons, cold-air intakes, and high-performance ignition systems aren’t prohibitively expensive as parts, but the true cost comes in getting those installed on your car and tuning them.

That’s why Lucky Costa swears by boost, preferably superchargers. Turbochargers are much more involved with having to reroute the entire exhaust system and can deliver power unexpectedly. A supercharger can bolt on easily in most cases; it’s much more simple to swap a front-end accessory drive for one that accommodates a supercharger pulley than it is to create an entirely new exhaust system, and the power delivery is more linear and predictable. All that makes for easier driving dynamics and a more livable street car.

Getting Power to the Ground

The Plastic Cup Boyz know that to be taken seriously as a car club their cars can’t just look the part. John thinks the margin between his eighth-mile time at Irwindale Speedway in his SS427 Camaro is too close to Spank’s time in his Chevelle SS396. Harry Ratchford has the exact opposite problem with his ’70 Chevelle. But Lucky has the solutions!

Quarter Water is a lesson in building and tuning a car right, the first time. “A lot of ‘trial and error’ went into the building of Quarter Water. Initially, I just wanted to modernize the car but soon found out that is easier said than done. I first shipped my car to Indianapolis to a Formula 1 race car driver who had a shop. The thinking was, who better to improve a car than an actual race car driver? Terrible mistake! Terrible, expensive mistake. When I got the car back, nothing worked,” Harry Ratchford told us.

It was Mark Bohlen at Bent Customs and Performance in Chatsworth, California, that got the Chevelle working right. Harry’s blue convertible Chevelle came with the 502ci GM crate motor in place, but the plan behind the build was to eventually swap to a supercharged or high-horsepower LS engine and build around that eventual plan (check out the build sheet below).

Now that Harry’s Chevelle is looking, running, and driving the way he wants (a whopping $125,000 later), it’s time to detune it? Harry’s daughter, Sage, has been begging to drive the car, and a 502 big-block Chevelle is just too much muscle for an inexperienced 24-year-old coming out of a Honda Civic. But just like Lucky has a solution for John’s ’68 Camaro in the form of a Magnuson supercharger, he has a solution for Harry’s Chevelle in dyno tuning.

Bolting a Holley Sniper EFI system to the top of an intake and letting it self-learn is all well and good, but it takes a seasoned professional to tap into everything an engine can deliver. That’s where Lucky’s friend “Tuner” Tom at New Era Performance comes in to work his magic. Not only can he add to the stock tune in the Holley system, he can take power out exactly where Harry wants it so his daughter can drive the car safely and comfortably. All it takes is a chassis dyno and a laptop.

“All of this upgrading and work earned Quarter Water her name.  The ‘Water’ part is from the blue color, but the ‘Quarter’ comes from the 125K I spent to upgrade her.  After telling Kevin how much I spent…Kevin responded in a way a multi-millionaire would and said, ‘Oh you just like 25K over budget or something like that. ‘  I responded, ‘What??? No, Kevin, I just wanted to spend 25K!’ …Kevin says, ‘Just a quarter?’ Hence that day forward…QUARTER WATER. “