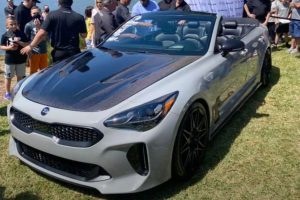 Even if the Stinger GT had enjoyed stronger sales, we can’t imagine Kia would have been chomping at the bit to make a convertible version. Four-door drop-tops simply haven’t been a thing for years, but for the few out there hankering after a Stinger that provides some alfresco motoring, it seems there is an answer.

A convertible Stinger appeared at a car show in Florida at the weekend (less strict Covid rules mean they’re still happening in the state), appearing to have official backing from Orlando-based dealer City Kia. According to a Redditor present at the show, the dealer wants to make 12 of them, all of which will apparently retain the standard Kia warranty. The car has some other modifications too, including a carbon fibre bonnet, new wheels, and possibly a drop in ride height.

The chap presenting to the crowd in the video mentions under-body stiffening measures, but beyond that, we don’t really know a whole lot about the creation. We can see said chap wearing a shirt with what looks to be the logo of Droptop Customs LLC, a company based a couple of hours north of Orlando in High Springs. We’re assuming it’s this firm that has been tasked with carrying out the work – we contacted both Droptop Customs and City Kia to confirm and also see if we can glean any additional information, but hadn’t heard back from either at the time of writing.

Aftermarket-converted four-door cabriolets are nothing new, it’s worth pointing out. Droptop Customs itself makes a Dodge Charger convertible, and you might have seen the Tesla Model 3 cabriolet from Newport Convertible Engineering we wrote about last year.

Manufacturers pour millions into redeveloping their hardtops into convertibles, designing clever folding and stowing mechanisms while making sure the vehicles they’re safe, the aero works and the handling isn’t scuppered to adversely. You aren’t going to get anywhere near the same experience from an aftermarket conversion, of course, so it all comes down to how badly you want the wind in your hair…