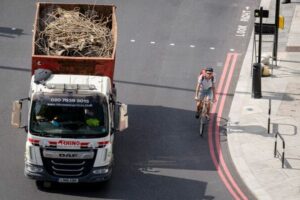 What changes are being made to the Highway Code?

Major Highway Code changes were introduced in January, with motoring organisations urging drivers to familiarise themselves with the driving rules again. One part of the revised code covers opening your car door blindly.

Cyclists have now been urged to remain vigilant as it will take some time for motorists to familiarise themselves with the new rule.

Cycling UK estimates that more than 500 people in the UK are injured annually by motorists opening a car door into someone’s cycle path.

And now a top lawyer has warned that the new rules could lead to an avalanche of lawsuits over accidents caused by the new rules.

Lawyer Nick Freeman, known as Mr Loophole, has claimed that some rules are lacking “common sense” and argued they could make pedestrians and cyclists even more vulnerable to motorists and lead to more road accidents.

He also said a third of people didn’t know about the changes to the Highway Code before they came into force, and warned that road user’s lack of awareness could lead to more lawsuits being brought.

He said: “Who says it is sensible for pedestrians to have the power to step out in front of a car at a junction and have priority.

“Or for a cyclist to take the crown of the road when we’ve got limited space, huge congestion, this is the most congested city in the world (London) because of cycle lanes, ‘you don’t need to use the cycle lanes Mr Cyclist, sit in the middle of the road and hold us up and we are going to sit patiently behind you’.

“That’s what they are entitled to do. It just lacks common sense.”

He continued: “A third of the country didn’t know about this (until last Saturday) and what’s concerning is the rest of the country, a significant balance, say ‘I’m not going to look, I’m not interested’.

The new rule states drivers should practice what is known as the “Dutch Reach”.