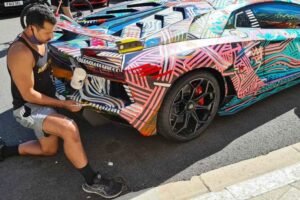 That’s a surefire way to grab the attention.

Lamborghini’s Ad Personam customization program offers a multitude of options to create a truly bespoke car, but the owner of an Aventador SVJ decided to take matters into his own hands. Rather than ordering his mid-engined V12 supercar and paying the peeps from Sant’Agata Bolognese extra for a custom finish, he used his talent and skills to create a unique look for his Superveloce Jota.

Saudi Arabian artist Abdullah Qandeel parked his prized possession worth hundreds of thousands of dollars in front of the Hotel de Paris in Monaco and then proceeded to hand-paint the supercar’s angular body. To make sure he grabs all the attention, the 33-year-old artist did it in the middle of the day at a five-star hotel.

Just so we’re clear, it’s easy to see that’s actual paint rather than a wrap. Not only that, but even the interior has received a similar colorful treatment, and we can imagine it’s a lot more difficult to revert to the vehicle’s original condition. At the end of the day, it’s his car and he can do whatever he wants with it.

A quick look on Abdullah Qandeel’s Instagram page shows the Aventador SVJ is not the first car to get such a vibrant finish as a 997-generation Porsche 911 GT3 Cup received a similar hand-painted exterior. Since we know diddly-squat about art, we are not at liberty to discuss how the cars look, but we will say it’s a surefire way to give a polarizing look to a couple of already attention-grabbing cars.

The Aventador SVJ he customized is only one of the 963 units produced by Lamborghini and it goes without saying the Porsche is not exactly common either.