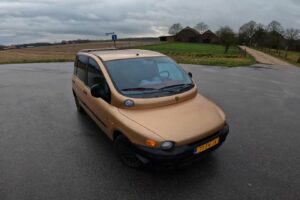 Even though the Fiat Multipla never made its way to the US, the MPV became known over here thanks to its quirky, controversial design. It also gained popularity (or notoriety) because it was a meme on wheels from day one. Just take a look at contemporary reviews and see what we mean.

Fiat pulled the plug on the Multipla back in 2010, but the car remains a punchline for some content creators. This year is no different since it stars in AutoTopNL‘s latest video for its April Fools gag. So what did the channel do to the tall hatchback? They took it for a top-speed run, of course.

But why film a Multipla for an Autobahn run? According to AutoTopNL, this is a one-off version of the people carrier. Ferrari and Lamborghini were “best friends,” according to the channel, combining resources to create this “bespoke” Lamborghini Multipla Super Veloce.

The “Multipla SV” comes with a few aerodynamic aids to keep it glued to the road. At the front are a pair of canards for extra downforce, while a wide rear wing sits on top of the tailgate. It even wears an homage to Oro Elios, a signature Lamborghini color.

Jokes aside, the Multipla used in the video won’t set any speed records. In this instance, the Fiat has a 1.6-liter four-cylinder that makes 102 horsepower (76 kilowatts)and 107 pound-feet (145 Newton-meters) of torque. Factory figures claim a top speed of 170 km/h (105 mph).

The “Lambo” Multipla struggled to get close to the manufacturer’s claimed top speed. It might be the tired engine, foul weather, or other factors, but the MPV didn’t reach 100 mph. The best it did on an unrestricted stretch of Autobahn was 140 km/h, which is about 87 mph.

Still, it’s amusing to see the little Fiat try to go fast on the Autobahn. It might not be quick, but at least the folks from AutoTopNL made it entertaining.