Lightyear 2 Solar-Powered EV Teased, To Be Priced Under $42K 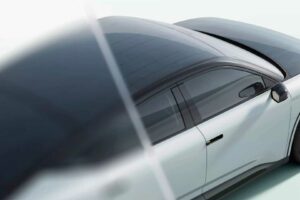 Introducing its first solar-powered EV earlier this year, the Lightyear 0, Dutch company Lightyear is now on to its second model. Aptly named the Lightyear 2, the sophomore take on the self-charging EV has been teased at this year’s CES. More importantly, the waitlist has been opened by the company prior to the model’s arrival in the next few years.

Judging by the teasers provided, it seems like the Lightyear 2 doesn’t veer away from the coupe silhouette of the Lightyear 0. Notable differences are the sleeker blacked-out pillars on the four-door model, along with additional black accents on the body. The second model also appears to have higher ground clearance, almost making the vehicle appear like a coupe crossover.

“Lightyear 2 will fast-track our mission of delivering clean mobility to everyone, everywhere. This is the first EV that allows consumers to prioritize sustainability, without compromising on practicality,” says Lex Hoefsloot, CEO and Co-Founder of Lightyear.

As with the Lightyear 0, the Lightyear 2 will require less charging from the grid compared to a conventional EV. In fact, the company touts that it can be the other way around, with the car having the ability to provide power that it harnessed from the sun.

Speaking of, the teasers provided show solar panels visibly installed on the roof, hood, and rear portions of the vehicle.

The company states that the Lightyear 2 should cut the driver’s lifetime CO2 emissions to half. The car should be able to offer over 800 kilometers (497 miles) of range in between charges, which is more than the Lightyear 0 that’s WLTP rated at 625 km (388 mi). In the latter, the solar panels are claimed to provide additional 70 km (44 mi) per day in ideal, sunny conditions.

The Lightyear 2 doesn’t have preliminary specifications for now apart from what was mentioned. Production is pegged to begin at the end of 2025, with the US, the UK, and the EU among the first regions to receive the vehicle. The estimated price point is below 40,000 euros or around $42,000 with the current exchange rates.