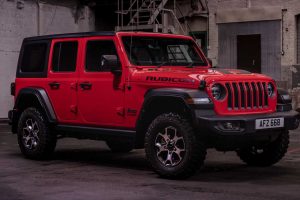 Production of the Jeep Wrangler 1941 will be limited to just 41 units in the UK, with the special model featuring a host of off-road focused upgrades

This is the new Jeep Wrangler 1941. It’s a special-edition version of the iconic off-roader, designed to commemorate the company’s 80th anniversary. UK production is limited to just 41 examples, with prices starting from £58,050.

Jeep says this special edition Wrangler is even better off-road than its standard stablemate, thanks to a host of mechanical upgrades. Chassis tweaks include a two-inch suspension lift kit with Fox dampers, more underbody protection, plus the same 17-inch alloy wheels and knobbly off-road tyres as the Wrangler Rubicon.

There are a few cosmetic tweaks over the standard Wrangler, too, including black door sill guards, front and rear mudflaps, a black fuel filler door and a unique ‘1941’ decal on the bonnet. Inside, the off-roader also gets a set of all-weather floor mats.

As the 1941 is based on the Wrangler Rubicon, standard equipment includes heated leather seats, climate control, ambient interior lighting, an 8.4-inch infotainment system and a seven-inch display screen for the instrument cluster. There’s also an eight-speaker Alpine stereo with a subwoofer.

The special edition Wrangler is only available with Jeep’s 2.2-litre four-cylinder turbodiesel engine, which produces 197bhp and 450Nm of torque. This allows a maximum towing limit of 2,495kg.

The engine sends drive to all four wheels via an eight-speed automatic gearbox and a two-speed transfer case, which has a 77.2:1 crawl ratio for low-speed off-roading.