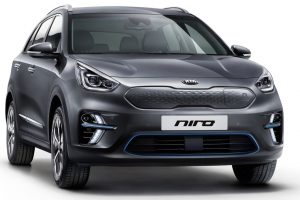 Kia has revealed a new long-range 64kWh battery version of its e-Niro electric SUV with a price tag of £34,945. The new model undercuts the recently announced lower maximum list price threshold for the Government’s plug-in car grant (PICG) and so qualifies for the cash incentive.

Cars costing more than £35,000 are no longer eligible for the grant, and alongside the new tighter qualifying criteria, the grant itself has been cut by £500 to a maximum of £2,500.

The new, sub £35k long-range e-Niro is available in ‘2’ trim, which includes an 8.0-inch touchscreen display, wireless Android Auto and Apple CarPlay, 17-inch aluminium alloy wheels, a reversing camera system and rear parking sensors. There’s also an adaptive cruise control system that can bring the car to a complete stop and restart it in traffic jams, plus keyless entry and go.

Ka claims the e-Niro ‘2’ Long Range is capable of travelling up to 282 miles on a single charge according to WLTP testing, and up to 382 miles in city driving. Indeed, the brand now claims that this new model has the greatest range of any sub-£35k electric vehicle.

Kia is the third manufacturer to realign pricing within its electric car range so that it complies with the lowering of the grant’s price limit. Citroen reacted by knocking £500 off the price of its range-topping e-C4 Shine Plus model, which it is expecting to be the best selling version of its new electric family hatchback-cum-crossover. Meanwhile, Vauxhall has also trimmed the prices of its new Mokka-e electric crossover and the Vivaro-e van.

The price of the high-specification Mokka-e Launch Edition has been cut from more than £37,000 to £34,995, while the Vivaro-e Life Edition has had its price reduced by more than £2,000 to comply with the lower PICG limit.

The new Kia e-Niro ‘2’ long-range is available to order immediately, with deliveries expected from July.

Tell us about your car in our new Driver Power survey…