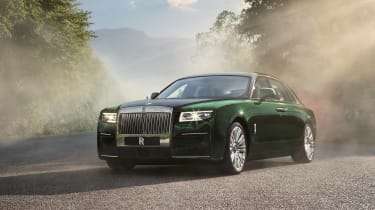 This is the Rolls-Royce Ghost Extended, a long-wheelbase version of the British brand’s latest luxury saloon. It’s also available to order now, with first deliveries due to arrive at the end of 2020.

With the exception of the flagship Phantom LWB, it boasts the most rear legroom of any four-seat saloon currently on sale, say Rolls. The Ghost Extended shares the same styling as the standard saloon – albeit with an extra 170mm worth of metal slotted into the wheelbase. However, Rolls-Royce says it was careful to not alter the Ghost’s styling too much, so the only noticeable changes are a slightly longer rear door and a subtly enlarged rear quarter panel.

Inside, Rolls-Royce has given the Ghost’s rear cabin a lift – as the company reasons that buyers will spend most of their time there. Upgrades include a pair of new business jet-like reclining leather chairs and a Champagne fridge, which has been calibrated to meet the needs of both vintage and non-vintage bottles.

For the project, Rolls-Royce’s engineers consulted a Master Sommelier, who told them that vintage Champagne should be served at 11 degrees, while non-vintage Champagne is better at a temperature of around six degrees. And, naturally, the Ghost has a button to switch between the two settings.

Buyers get the same level of technology as the standard Ghost. So, there’s an on-board WiFi connection and a sophisticated cabin air filtration system, which can automatically detect impurities in the outside air and removes them using a nanofleece filter. 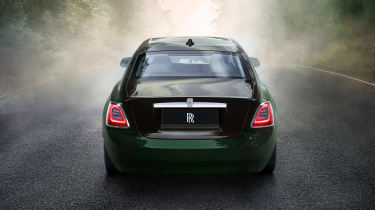 To keep the chauffeur happy, Rolls-Royce has retained the standard Ghost’s suite of driver assistance technology. So, there’s a 360-degree camera, an auto-park function, active cruise control and a radar system which can detect pedestrians and animals both during the day and at night. The Ghost’s laser headlights also have more than 600m of illuminated range.

The Ghost Extended is powered by the same twin-turbocharged 6.75-litre V12 engine as the standard model. It delivers 563bhp and 850Nm of torque – enough for a 0–62mph time 4.8 seconds and a top speed of 155mph.

Buyers are unlikely to hear their engines working, though, as Rolls-Royce fitted 100kg-worth of acoustic damping to the interior and chassis, in an effort to stamp out any intrusive sounds from the powertrain, road and wind.

Henry Cloke was tasked with leading the exterior design team on the all-new Ghost. We sat down with him to chat about his latest creation and what it means to him and his clients.

A:  “I think having the long bonnet and that stance, the proportions give it that flow and that dynamic. So it’s not really styled to look sporty in any kind of superfluous, sporty way, but it definitely looks like you would get in it and you might want to drive it.”

Q: What is your favourite part of the design? What do you look at and you just think, “That was me”?

A:  “For me, it’s the face of the car. We see the car as a clay model, and then as some prototypes; it’s actually quite a long time between. Then it almost comes off a truck fully finished where you suddenly see that face looking back at you that you sketched probably three or four years beforehand. I think that’s the bit that gets me. ”

Q:  How is the landscape of luxury shifting?

A:  “There are lots of people who actually want to come and really understand how their cars are made.”

Now read our review of the previous-generation Rolls-Royce Ghost here...

END_OF_DOCUMENT_TOKEN_TO_BE_REPLACED

END_OF_DOCUMENT_TOKEN_TO_BE_REPLACED
We and our partners use cookies on this site to improve our service, perform analytics, personalize advertising, measure advertising performance, and remember website preferences.Ok