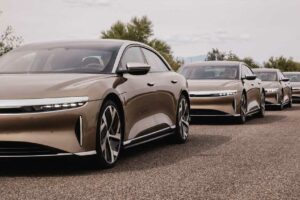 We were the first people not employed by Lucid to drive an Air—specifically, the long-range Dream Edition R—and boy, did we have a lot to say about the sleek luxury EV. But this tiny, exclusive club of Lucid Air experiencers is about to get a little bigger. The company teased some Airs on a vehicle transporter a few days ago, and today it announced it will begin deliveries of the Air this weekend.

The Lucid Air went into production in the company’s Casa Grande, Arizona manufacturing plant just last month, and the first batch of Dream Editions (both the R, as we sampled, and the higher-output P variant) will head to customers on October 30. A variety of P and R trims will be there, depending on what the customer ordered.

The delivery event, taking place in California, is part of the Dream Delivery program, which is a package of experiences bundled around delivery. This includes the “Lucid Rally” which is some sort of drive route through the California landscape that highlights the Air’s dynamic capabilities. After the drive, which is presumably optional, customers can drive their Airs away.

If the newly-delivered Air Dream Edition R has a full charge, based on our long-distance trip we imagine it’ll be able to take its occupants in the neighborhood of 500 miles away from the delivery event.

Lucid hopes to deliver a little over 500 Airs this year, all Dream Editions, with the lower-priced Grand Touring following thereafter. The Dream Editions feature a 118 kWh pack, while the Grand Touring gets a slightly smaller 112 kWh pack and a maximum of 516 miles of estimated range.