Home » Car Reviews » Magna to Apple: We Can Build Your Car

Magna to Apple: We Can Build Your Car 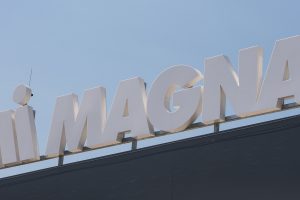 Magna is ready and willing to build a vehicle for Apple (or anyone else) and add a manufacturing plant in North America if contracts warrant the investment. So says Swamy Kotagiri, the former chief technology officer who took over as Magna CEO on Jan. 1, moving from a role in developing products and strategy to one putting him in charge of the Canadian auto supplier’s 158,000 employees worldwide. It is a humbling responsibility, he said at a Society of Automotive Analysts virtual event.

As an automotive supplier, Magna continues to augment its portfolio of components, systems, engineering, and assembly of vehicles with electrified powertrains and autonomous vehicle technology. But Magna is an especially intriguing supplier because it also assembles vehicles for others. The Magna Steyr plant in Graz, Austria, has built 3.7 million vehicles with about 30 different nameplates, over the years, including Chrysler, Jeep, Mercedes, Jaguar, BMW, and Toyota badges, to name a few. The plant, with the capacity to assemble 200,000 vehicles a year, has also ventured into electric vehicles. It makes the Jaguar I-Pace, and in late 2022 Magna will make the 2022 Fisker Ocean electric SUV in Graz.

“We don’t want to be a brand so we can work with everybody,” Kotagiri says, established automakers and non-traditional entrants like Apple, alike.

Magna a Logical Choice to Make an Apple Car

Magna has been touted as a logical choice for Apple’s EV plans, since it seems the company is leaning towards contracting out production of an Apple-designed and branded vehicle much like it outsources manufacturing of its computers and devices rather than build its own factories.

Talks with traditional automakers, including Hyundai, Kia, and Ferrari, ended without deals. Magna and Apple have held discussions in the past, notably about five years ago when Apple made headlines for its desire to make its own electric, self-driving car. The initiative, called Project Titan, attracted a lot of talent and large pool of employees, but after losing steam it was downsized and some of its employees let go. And no agreement was inked with Magna. But efforts have stepped up again as Apple reportedly now aims to build an autonomous vehicle by 2024.

Kotagiri said he does not divulge specific information about customers, but said Magna has the ability and desire to make vehicles for Apple. In addition to engineering and assembling vehicles, he notes that Magna has a lot of systems knowledge from its history of car-building; it knows how to bring intricate pieces and complex systems together. Magna has shown its ability to do high-volume as well as niche vehicles—often on the same assembly line—and can handle conventional as well as hybrid and electric powertrains.

Magna has expanded its contract manufacturing base to include a second plant in Zhenjiang, China, that opened in 2020 and is making an electric SUV for Beijing Electric Vehicle Co. With capacity to make 180,000 vehicles a year, there is room to add more automotive customers. Magna also has a paint facility in Slovenia that operates as a satellite facility to supply Graz. The supplier would like to expand the Slovenia operation to assemble complete vehicles.

And for years the company, headquartered outside Toronto, has said it would build vehicles at a plant in North America if contracts and demand warrant. “We always said if there was a case to add capacity in North America, we would do so,” Kotagiri says. “Absolutely.”

During a virtual media event in October, Magna Steyr president Frank Klein said the company was looking for a production site in North America, and that the prospect of adding a plant was better now than it had been for years. He said the emphasis would be on battery electric vehicles as more automakers pledge further electrification of their lineups. At that time, Klein said Magna was in serious talks with potential customers and a new plant would need contracts with at least two different companies.

Kotagiri did not provide specifics today, but said Magna needs to know it will be able to utilize full capacity at a plant in North America to proceed. The contract assembler will not advance with a one-time contract for 50,000 or 100,000 vehicles, for example. Magna can even start with a smaller commitment of 10,000 or 20,000 vehicles from a customer if there is a commitment to a couple design cycles and growth to a larger set capacity over five or 10 years. The company is in a good cash position, but to justify investment requires a plan for long-term viability.

Magna also needs a clear picture of a customer’s needs, whether that be just final assembly or something more, like a paint shop, in order to determine how quickly manufacturing could begin. And there are further wrinkles: Is Magna just a supplier or does it receive an equity stake, (as is the case with Fisker)? And does Magna share the risk, or does it all fall on the supplier’s shoulders?

The Canadian company continues to expand in other areas.  Magna will also make battery enclosures at a new $70 million plant in Michigan for General Motors’ 2022 GMC Hummer EV fullsize electric pickup truck. The Magna Electric Vehicle Structures facility is now under construction and hopes to begin production in early 2022 of this enclosure—especially important in a truck designed to go off-road and traverse streams.

In late 2020, Magna announced a joint venture with LG to make electric motors, converters, and on-board chargers as well as e-drive systems. The deal is expected to close in July, creating a global company with more than 1,000 employees in the U.S., South Korea, and China devoted to electric powertrains.

The supplier continues to come up with innovative products. Magna recently introduced the eBeam, an interim solution to electrify traditional fullsize pickup trucks with a ladder-frame chassis and live rear axle by dropping in an integrated single or dual-e-motor axle.

As it expands, Kotagiri makes one thing clear. “We do not want to be an automaker.”  Magna wants to continue to be a major player in the auto industry but as a profitable contract assembler and supplier. Magna sees itself as having the agility of a startup—it just happens to be a $40 billion startup with a 60-year history.