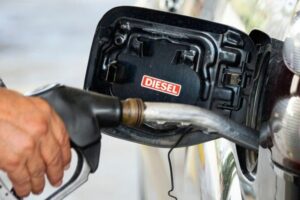 From today, April 1, major diesel changes will be made to cut down on pollution rates from certain industries by restricting the use of certain rebated fuels. Rebated diesel, or red diesel, and rebated biofuels will no longer be allowed to be used as they currently are.

People will only be able to use rebated fuels for specific purposes, including when using machines, vehicles, vessels and appliances.

Red diesel is the same as standard diesel, also known as white diesel, but is dyed red to make it easily identifiable because it is taxed at a much lower rate.

For those who will no longer be able to use rebated fuel, they will need to use diesel or biofuel which the full rate of fuel duty has been paid for.

There are now fears that companies which currently use red diesel to fuel vehicles and equipment will pay around 47p a litre more for the fuel.

Operating costs are expected to rise by around 15 percent, with companies facing additional fuel expenses of between £100,000 and £400,000 per year – according to research commissioned by Resource Management Association Scotland.

CPS Fuels found the switch from red to white diesel alone will bring an additional expense of 46.81 pence per litre used, resulting in five times as much duty rate as before.

Earlier in March, many farmers and construction workers saw prices for red diesel increase dramatically, with some businesses reporting the price to be as high as 112p per litre.

In his 2020 Budget speech, Chancellor Rishi Sunak announced that red diesel would be restricted, saying it had “hindered the development” of cleaner fuels.

He said: “The Red Diesel scheme allows selected users to pay duty of just over 11p per litre for diesel, compared to almost 58p per litre for everyone else.

“But the sectors using red diesel are some of the biggest contributors to our air quality problem – emitting nearly 10 percent of the most noxious gases polluting the air of cities like London.

“This is a tax relief on nearly 14 million tonnes of carbon dioxide every year, the same as the entire population of London and Greater Manchester taking a return flight to New York.

“It’s been a £2.4billion tax break for pollution that’s also hindered the development of cleaner alternatives.