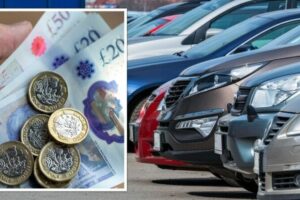 Business leaders have urged politicians in Scotland to scrap plans to give councils the power to introduce workplace parking charges ahead of a key vote on the issue. It is expected that Scottish Conservatives are to bring a motion to annul the workplace parking levy (WPL) to Holyrood’s Net Zero, Energy and Transport Committee meeting.

The WPL rules had been handed over to local authorities in 2019 as part of a budget deal with the Green Party in Scotland.

Many have criticised the plans to introduce a workplace parking scheme, given the increase in living costs and the impact the pandemic has had on businesses.

The Scottish Chambers of Commerce (SCC) has written to the committee, calling for the levy to be “scrapped or, at a minimum, further deferred”.

Transport minister Jenny Gilruth stressed the regulations would “provide local authorities with the tools on workplace parking licensing, already held by councils in England and Wales and welcomed in Scotland”.

Despite this, Liz Cameron, director of the Scottish Chamber of Commerce, criticised the “additional financial burden it places on businesses and their employees”.

She added: “This has become even more pertinent in the wake of the pandemic and the emerging cost of living.

“To support Scotland’s businesses and economic recovery, SCC believe the WPL should be scrapped or, at a minimum, further deferred.”

The legislation, which could be introduced as early as next month, could be launched without an upper limit on charging.

Nottingham is the only city in the UK to have the scheme, with a cost of £415 per space per year, which has generated around £64million since 2012.

There have been calls to introduce the scheme in Leicester, with consultations being launched which looks at charging companies with more than 10 parking spaces £550 a year per space from next year.

Liz Cameron fears that introducing a WPL without an upper limit could hit “town and city centres hard”.

She continued, saying: “Many businesses are still recovering from the financial impact of the pandemic, which has severely reduced trade and significantly increased costs over the past two years.”