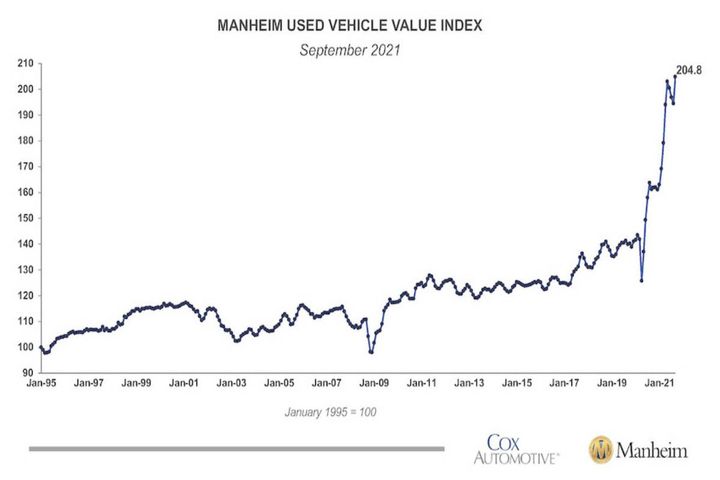 Wholesale used vehicle prices (on a mix-, mileage-, and seasonally adjusted basis) increased 5.3% month-over-month in September, according to Cox Automotive.

This brought the Manheim Used Vehicle Value Index to 204.8, a 27.1% increase from a year ago and another record high in a year of records.

The Three-Year-Old Index increased a net 4.6% over the full four weeks in the month.

MMR Retention, which is the average difference in price relative to current MMR, averaged 100.8. This means that market prices were ahead of MMR values.

On a year-over-year basis, all major market segments saw seasonally adjusted price increases in September. Vans and sport utility vehicles had the largest year-over-year performance, while the remaining car and pickup segments lagged the overall market. No segment saw declines on a month-over-month basis.

Commercial sales are down 18% year over year in September and are up 13% year-to-date 2021 versus 2020. Including an estimate for fleet deliveries into the dealer and manufacturer channel, the report estimates that the remaining retail sales were down 23% year over year in September, leading to an estimated retail SAAR of 10.7 million, which was down from 14 million last September and down from September 2019’s 13.8 million rate.