Maruti Suzuki, the country’s largest car manufacturer, has announced crossing the 20 million sales milestone in India. With this, the Indo-Japanese carmaker has become the first and the only Indian car manufacturer to have achieved this landmark number yet. While it took the company a good 29 years to cross first 10 million sales milestone, the next 10 million cars were sold in a record time of just 8 years, crossing the 20 million mark in less than 37 years.

It all began with the roll-out of the first Maruti 800 car, on December 14, 1983, one of the most iconic cars in India. The one-millionth Maruti Suzuki car was sold in less than 2 years from that day. 10 years later, between the year 2005-06, the company crossed the 5 million sales milestone, while the next 5 million cars were sold within the next 5 years, by 2011-12. From there, it took Maruti Suzuki India just 4 years to breach the 15 million sales milestone, and just 2 years to sell the remaining 5 million cars. 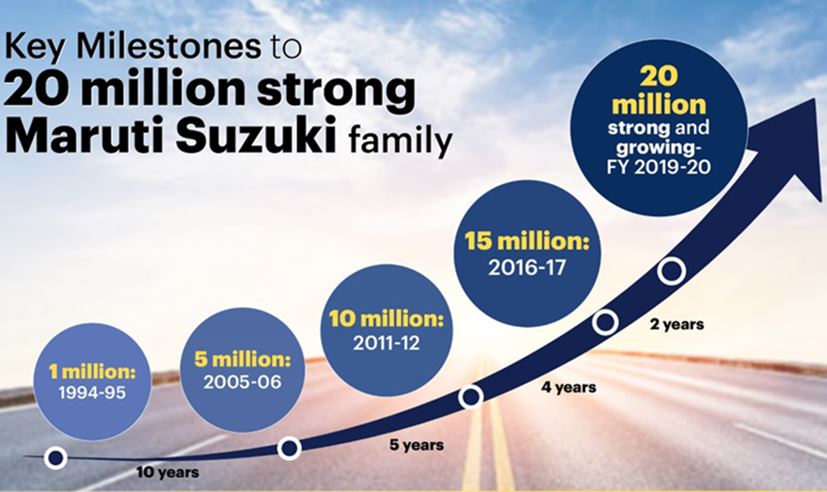 Talking the company’s latest sales achievement, Kenichi Ayukawa, Managing Director & CEO, Maruti Suzuki India Limited said, “We are overwhelmed with this new record. Achieving this milestone is a great accomplishment for Maruti Suzuki, as well as our suppliers and dealer partners. We are thankful for the immense trust placed in us by the customers, long-lasting partnerships with our stakeholders as well as the support extended by the Government. Maruti Suzuki was incorporated with a mission to put India on wheels. A mission where every Indian family could fulfil its dream of owning a car, which we continue to work towards.”

Over the last years, Maruti Suzuki has become the undisputed leader of the Indian carmaker, with the largest market share. In addition to petrol and diesel cars, Maruti Suzuki has introduced factory-fitted CNG vehicles as well as Smart Hybrid vehicles in the Indian market, and it was also among the first carmakers to adopt BS6 emission standards well before the stipulated period. In fact, currently, 70 per cent of the company’s fleet is BS6 compliant with 8 models and has already sold over 3 lakh BS6 compliant cars in India. As for the next step, the company along with its parent, Suzuki Motor Corporation, aims to introduce a small EV for the Indian market. Currently, it is road-testing 50 Electric Vehicle prototypes across the country to check their real-life performance in multiple terrains and varied climatic conditions.

END_OF_DOCUMENT_TOKEN_TO_BE_REPLACED

END_OF_DOCUMENT_TOKEN_TO_BE_REPLACED
We and our partners use cookies on this site to improve our service, perform analytics, personalize advertising, measure advertising performance, and remember website preferences.Ok