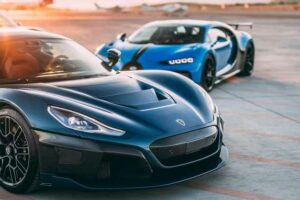 “If you told me two years ago, I would be CEO of Bugatti I would have said you are [email protected]#%#$ crazy,” Mate Rimac, the 33-year-old whose Croatian electric car and tech company is finalizing a deal to take over Bugatti, said. He has big plans for the French brand once it’s under his control, too.

After years of struggle, the Rimac brand is about to deliver its 2022 Nevera electric hypercar. Meanwhile, the tech side of the company is growing as a company of repute, and Mate will soon take over as CEO of Bugatti, which is being folded into a new company that will start trading as Bugatti Rimac in the fourth quarter. The new sheriff wants to broaden the Bugatti lineup, known for the Veyron and the Chiron, with more models, different styling, and electric powertrains.

Mate is still exploring what that will look like, but Bugatti’s lineup will no longer consist of just two-seat hypercars. “I might do something crazy,” he added.

The Next Bugatti Body Style?

First, Bugatti needs a Chiron successor. In five years’ time, the brand’s portfolio could expand, though.

“With this brand, you can do so much. Maybe an SUV or long hood coupe or something absolutely insane that no one thinks about,” Mate said.

Bugatti and Rimac hypercars will use Rimac’s high-performance electric powertrains. Two new Bugatti models, engineered by Rimac, are coming by 2030: the first a gasoline-electric hybrid, which will then be followed by an EV.

Bugatti is a 112-year-old French automotive brand with a rich heritage of craftsmanship that became part of the Volkswagen Group in the late 1990s; however, it was not a sustainable fit. It made sense for VW to divest itself of the brand, Mate told MotorTrend in an interview during Monterey Car Week. The Volkswagen Group works with high-volume platforms. “They don’t have anything in the Group for hypercars. For them to develop a bespoke hypercar would cost billions. It couldn’t work. They are too big a company.”

Rimac has been a low-volume electric hypercar maker and a tech company that sells EV components and expertise to others. Mate sees Bugatti as a good fit for the new Rimac Group and is brimming with ideas.

Taking Bugatti Back to Its Roots

There are different things Bugatti can do in the future, from a tech standpoint and positioning in the market, Mate said. Under VW, the Bugatti lineup consisted of vehicles built around the W-16 engine, but Mate wants to take the brand back to its multi-model roots and develop multiple advanced, electrified vehicles.

Meanwhile, Bugatti has greenlit the 1,824-hp Bolide, with plans to sell 40 of the race-ready track cars for $4.7 million each with deliveries set for 2024. Production commences after Bugatti finishes building the Bugatti Chiron and its variants in late 2023.

The Bugatti buyer is a different customer from a Rimac one, both Mate and Heyl said. Rimac brand cars will stay low volume, no more than 100 units a year, with only one model at a time, serving as the pinnacle of the company’s tech. Rimac will build 50 Neveras per year over the course of three years, for a total of 150 cars. It will be followed by a successor with a new Croatian name.

Mate hopes Rimac has the ability to build vehicles efficiently enough to develop significantly different models—not reskin things—and bring each to market for less money than it would cost a large automaker.

As for the corporate structure, Rimac Group (formerly Rimac Automobili) will own Rimac Technologies, as well as the new Bugatti Rimac. Rimac Group’s major stakeholders include Mate Rimac, Porsche, and Hyundai.

Bugatti Rimac is 55 percent owned by Rimac and 45 percent by Porsche. It will be devoted to building hypercars for both Bugatti and Rimac, but both will be separate brands. Bugatti and Rimac vehicles will be built at different plants and sold through their respective distribution channels. While both brands will retain their respective headquarters in Zagreb, Croatia, and Molsheim, France, there will be a new campus in Croatia in 2023 in order to allow for a combined workforce in the future.

“We show with our car what we can do and sell to others,” Mate said. While he has enjoyed lower volume work, such as assisting in the development of the Battista for Pininfarina and helping create the battery and infotainment systems for the Aston Martin Valkyrie, Mate wants Rimac Technologies to target larger volume contracts with major automakers.

Mate is CEO of all three companies and said there are clear firewalls between stakeholders and automotive customers. Aston Martin CEO Tobias Moers said Mate has a lot on his plate to sort out. Mate laughed, thanked Moers for the free advice, and acknowledged he needs to prioritize. The plan is to spend half his time on Bugatti Rimac and the other half on Rimac Technologies, while also trying to squeeze in a few other things. But he is getting out of Greyp Bikes and dialing down the work he is doing on robotaxis.

“I was a 20-year-old when I started,” Mate said of creating Rimac in a garage in Croatia. “I didn’t know what I was doing. [Today,] I feel like I’m becoming part of this industry.”