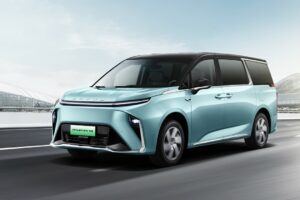 The Maxus MIFA 9 will arrive on British shores at the end of next year, with a 241bhp powertrain and a maximum range of 323 miles

SAIC Maxus, the now Chinese-owned remnants of LDV, has plans to launch a new electric MPV in the UK at the end of next year, called the MIFA 9. It’ll rival the likes of the Peugeot e-Traveller and the upcoming passenger-carrying variant of the Volkswagen ID. Buzz.

Sales are set to start in the third quarter of 2022, with buyers offered the choice of seven- and eight-seat layouts, as well as three specifications. Unlike its work-hardened competitors, though, the MIFA 9 aims to target a more premium audience, offering luxuries normally reserved for executive saloons.

Buyers will be offered electrically adjustable seats with heating, ventilation and massage functions – and the rear chairs will even have smartphone-style touch screens built into the armrests and extendable footrests, similar to those on the latest Mercedes S-Class. However, we expect some of these features will be reserved for the top-spec model.

Up front, there’s an enormous infotainment system that spans the width of the dashboard and includes a digital gauge cluster and two multimedia displays – one for navigation instructions and one to keep the front passenger entertained.

There’ll also be a full complement of driver-assistance technology, including a system that can help keep the car centred in narrow lanes and a parking assistant which can monitor the  150 square metres of space around the vehicle for hazards when manoeuvring.

The MIFA 9 measures 5,270mm long, 2,000mm wide and 1,840mm tall, while its wheelbase is 3,200mm. That means it’s about the same size as the largest version of the Citroen Dispatch panel van, so there’ll be tonnes of space inside. Maxus has also fitted the MPV with sliding doors, to help with access in tight car parks.

It’s powered by a 90kWh battery pack and a single electric motor with an output of 241bhp and 350Nm of torque. Maxus says the system offers a range of 323 miles, although it’s worth noting that figure was logged under the more lenient NEDC test programme. We expect it will reduce once the MPV has passed through WLTP homologation.

Maxus has plans for expansion beyond MPVs, however. The MIFA 9 is the first vehicle built on the company’s new MIFA electric underpinnings, which Maxus says can also be used for SUVs and pick-up trucks. So, we could see new Chinese rivals for the likes of the Skoda Enyaq and Toyota Hilux in the near future.

What does the new Maxus MIFA 9 have to beat? Click here for our list of the best seven-seat electric cars on sale now…