Home » Car Reviews » Mazda CX-30 CKD launching in Malaysia in second half of 2021 – up to RM15k less than CBU, reports claim – paultan.org

Mazda CX-30 CKD launching in Malaysia in second half of 2021 – up to RM15k less than CBU, reports claim – paultan.org 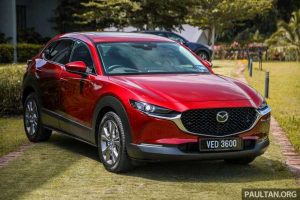 According to investor reports prepared by AmInvestment Bank and Public Investment Bank, Bermaz Auto (BAuto) has apparently been given the green light from Mazda Japan to begin its third local assembly (CKD) programme involving the Mazda CX-30 SUV this year. The company currently makes the CX-5 and CX-8 locally at the Inokom plant in Kulim, Kedah.

It was previously reported that BAuto planned to introduce a new locally-assembled Mazda SUV during its current 2021 financial year (FY2021), which runs from May 1, 2020 until April 30, 2021. BAuto CEO Datuk Francis Lee confirmed in an interview that the Inokom facility would be upgraded with an investment of RM200 million to accommodate the new CKD model.

At the time, it wasn’t known what SUV would be added to the production line-up, with the CX-30 and MX-30 being notable candidates. With this latest bit of news, it appears the former is the one that has been picked, although Lee did say in the past that a mild hybrid version of the MX-30 is on the way, along with the new BT-50. The details mentioned in each report do somewhat correlate, with Public Investment Bank claiming production of the CX-30 at the Inokom plant will only begin in December this year. Meanwhile, AmInvestment Bank says the new CKD model will be launched in the second half of 2021 and expects it to be cheaper by as much as RM15,000 compared to the fully-imported (CBU) offering we have now.

Based on the AmInvestment Bank’s claims, a RM15,000 price reduction, when assumed to be across the board, would see the CX-30 range goes for between RM129,759 and RM155,459. That should make the SUV, which slots in between the CX-3 and CX-5, a lot more appealing to customers.