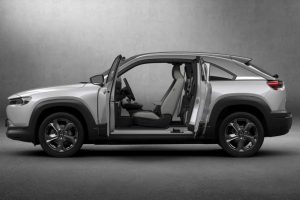 Mazda confirmed its MX-30 small crossover will come to the U.S. as either an electric vehicle or plug-in hybrid with a rotary engine.

Mazda hasn’t released many details, but the rear-hinged rear doors and sloped roofline give it an almost fastback shape up top, while the lower half wears prodigious black cladding somewhere between a Subaru Crosstrek and a Pontiac Aztek.

It’s unclear how the MX-30 concept introduced late in 2019 will fit into Mazda’s current lineup of crossover SUVs. It’s the same length as the Mazda CX-30 that launched for 2020. That small crossover is larger than the CX-3, which is more like a hatchback than a crossover and has been pared down to one trim level. It likely won’t be around for 2022.

Another curiosity is the use of a rotary engine as part of the plug-in hybrid powertrain. Mazda last used a rotary engine a decade ago on the RX-8 sports car. Rotary engines are known for their simplicity and lighter weight in terms of fewer moving parts than a piston-cylinder combustion engine, but they’re not very efficient.

The rotary engine used in Japan for the MX-30 is a range extender, according to Green Car Reports, so it might serve as more of a backup generator to power the electric motor rather than as a propulsion source. In Japan and Europe, the MX-30 uses a 35.5-kwh battery pack and has a range of only 124 miles on the WLTP standard.

It would be the first electric and plug-in hybrid electric Mazda sells in the U.S.

END_OF_DOCUMENT_TOKEN_TO_BE_REPLACED

END_OF_DOCUMENT_TOKEN_TO_BE_REPLACED
We and our partners use cookies on this site to improve our service, perform analytics, personalize advertising, measure advertising performance, and remember website preferences.Ok