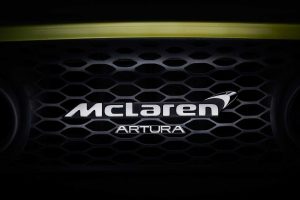 McLaren has offered plug-in hybrids before, but never as part of its popular Sport Series lineup of model.

We are one week away from seeing the new McLaren Artura, the firm’s first mainstream plug-in hybrid model, which is set to be revealed on February 17. McLaren has sold PHEVs in the past, the most notable of which has to be the P1 hypercar, but electrification never played a major part in powering its more attainable models.

The Artura will be released to correct that and even though we’ve not been offered too many details about it, we have learned a few details from the freshly uploaded video teaser. Firstly, it would appear that with a fully-charged battery (whose capacity we currently don’t know), the car will have a pure-electric range of 20 miles (32 km).

Providing most of the motivation will be a new force-fed V6 engine that replaces the V8 that McLaren has been using since the days of the MP4-12C. We don’t have any details about this new power plant, though, other than the fact that it will sit in McLaren’s new MCLA chassis architecture that heavily relies on carbon fiber for its main structure.