Home » Car Reviews » McLaren SUV Is In Development, And It's All-Electric: Report

McLaren SUV Is In Development, And It's All-Electric: Report 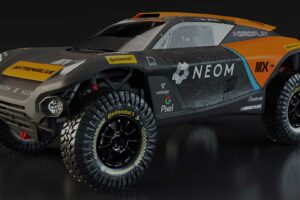 The rumors of a McLaren SUV are once again stirring. In a discussion with McLaren CEO Michael Leiters, UK-based Car magazine claims the process has already started. Furthermore, it will be a pure electric vehicle, making it both McLaren’s first SUV and its first EV. Allegedly, that is.

While the report says it’s happening, we’ve yet to hear anything official from McLaren on the subject. The various quotes from Leiters in Car’s story are inconclusive, talking about how a McLaren SUV might come to life versus a full-blown confirmation that it’s already underway. We contacted the supercar brand directly in hopes of confirming or denying the report; we will certainly offer an update should new information become available.

We present the report because there’s certainly evidence to support McLaren’s change of heart regarding SUVs. Among other things, Leiters – who replaced Mike Flewitt at the top as of July 2022 – has already professed he’s a fan of SUVs. Moreover, he has notable experience in this segment, having worked both at Porsche and most recently Ferrari with the Cayenne and Purosangue.

And lest we forget, McLaren already revealed an all-electric SUV, though it won’t be one used for daily trips to the store. In November 2021, the company pulled the covers off the Extreme E – a dedicated racing vehicle competing in the Extreme E off-road series. There are obviously a few caveats with this, with the first being it’s obviously not a production vehicle. For that matter, it doesn’t preview a possible McLaren production model either, as all Extreme E vehicles use a common chassis. Even the body is a standard-use item, but still, it’s racing in Mclaren’s wheelhouse.

It’s also no secret that high-dollar super SUVs have been immensely successful for companies like Lamborghini and Aston Martin. Our own research has shown just how lucrative this segment can be, and with McLaren still struggling in the financial department, a high-performance SUV might be mandatory at this point.

Check out the Rambling About Cars podcast for more super SUV content and witty banter on all things automotive, available below.