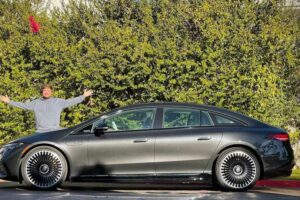 We ask ourselves on a daily basis, is there a time Kyle Conner isn’t traveling all over the world test-driving the latest electric cars? It seems not, as he was just in sunny Palm Springs, California, to take Mercedes’ first fully electric AMG model for a spin. More specifically, Conner spends plenty of time providing a detailed look at the 2022 Mercedes-AMG EQS 53 4MATIC+ before taking us for a ride to deliver his first impressions.

There’s are a few important details we don’t yet know about the Mercedes-AMG EQS 53, such as its EPA-estimated range. However, we do know it has a battery with about 108 kWh of usable capacity. Conner says with Mercedes’ standard EQS models pushing some 400 miles of range, the AMG should do quite well. It has different motors and cooling strategies than other variants, though it’s not that different as far as its drivetrain is concerned.

There’s no question this Mercedes is ultra-luxurious, spacious, and comfortable inside. It features special magnetic doors, loads of trunk space, some eye-catching 22-inch wheels, and Michelin EV tires specifically designed for the AMG EQS 53. Conner admits that even though the AMG has features that make it look arguably nicer than other EQS variants, he’s still not sold on the overall design.

He takes us through the notable differences between the AMG model and the standard Mercedes-Benz variants before hitting the road to share his first impressions. The EQS 53’s regenerative braking system now accepts 300 kW, which Conner believes may be the best in the industry. It also has better thermal management than other variants.

As far as the sedan’s performance is concerned, it’s clear AMG prioritized ride comfort with the EQS 53, which isn’t typically the case with AMG’s models. The electric sedan is nearly as comfortable as the standard EQS models, as well as quiet and refined on the highway. It tackles canyon roads with confidence, but it’s not highly athletic.

Conner says the various regen modes seem to work quite well, though the brake pedal feel leaves much to be desired. Moreover, AMG could do a better job with the blending between the traditional friction brakes and the regen system. The car actually pulls the brake pedal away from your foot as your lift off the accelerator pedal. This will likely surprise drivers and take some getting used to.

Be prepared to chuckle when Conner launches the car, as it produces some interesting “Star Wars-type sounds.” He says that while the AMG EQS 53 is quick, it’s nowhere near as eager as the Tesla Model S Plaid, which is to be expected.

In the end, Conner says if you have the money to burn, and you’re looking to buy the best EQS, the AMG model is a solid option since you won’t really be giving anything up over the standard versions, and you get better acceleration.

However, he still suggests going with the EQS 450+ or 580 4MATIC, since folks looking to buy a Mercedes flagship sedan are likely in the market for a comfortable cruiser rather than a high-performance machine.