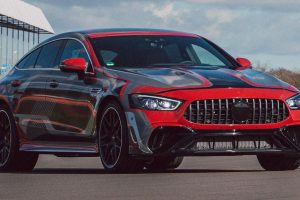 The Mercedes-AMG GT 4-Door Coupe range will soon welcome a new plug-in hybrid variant called the GT 73, which has been spotted for spy photographers previously. However, we now have official photos of the upcoming model alongside the One hypercar as well as this year’s W12 F1 racer.

Visually, the GT 73 looks pretty similar to the current, range-topping GT 63, but there are some notable differences. For instance, the central intake has new ducting, while the outside inlets at the edges of the front bumper sport angular slats instead of horizontal ones.

More importantly, the badging on the fender reads “V8 Biturbo E Performance” instead of “V8 Biturbo 4Matic.” The E Performance label is an indicator of the company’s use of electrification to provide greater performance, with all three cars you see before you being primary representatives. The company isn’t willing to talk numbers just yet, but the GT 73’s expected PHEV powertrain is said to consist of a 4.0 litre twin-turbo V8 petrol engine, an electric motor and a lightweight battery pack. This setup is similar to the GT Concept that arrived way back in 2017, and said show car was rated at 815 PS (805 hp), allowing it to rocket from zero to 100 km/h in less than three seconds.

One line that stood out in the company’s release talks about the electric turbocharger, which is “standing the test in Formula 1 under extreme conditions and will soon be used in AMG production models.” Given that the release talked about closer ties between Mercedes-AMG and the championship-winning Mercedes-AMG Petronas F1 Team, the GT 73 should be quite the machine.