Mercedes-Benz Drops Almost All V8s for 2022 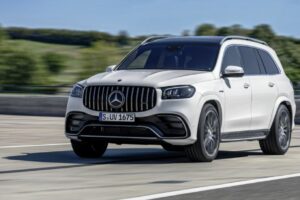 In an unexpected move, Mercedes-Benz has told its dealers that a significant number of V8-engined models will not be offered stateside for the upcoming 2022 model year, publishing a long list of vehicles that won’t be offered in eight-cylinder form. The automaker has cited unspecific supply chain issues for the reason, though the specifics remain murky at the moment, given the fact that plenty of other powerful engines, including ones offered in AMG-badged cars, will remain on the menu for the 2022 model year.

Of course, this still leaves a number of AMG models that rely on six-cylinder engines, as well as some non-AMG models like the S-Class, so it’s not quite a total shutout. However, this is bad news for those who’ve ordered or plan to order a G-Class in the next year, as this model is offered solely with a V8 engine stateside. (In retrospect, this is why it would have been useful to offer smaller-engined G-Class versions stateside, in addition to the lower price of entry).

“MBAG has prioritized its focus to comply with various global, external, and internal requirements, as well as several other factors, including but not limited to, challenges in the supply chain that have an impact on the product portfolio offered in the US market,” the automaker said in a letter to dealers that was first leaked on Reddit.

Mercedes, among other automakers, has been affected by the global chip shortage, but it hasn’t been confirmed whether this particular decision was made on this basis or other. In the past, Mercedes has sometimes shelved US-bound models simply for business reasons, choosing to cater to greater demand in Europe, as has happened with the battery-electric Mercedes-Benz EQC sport utility, which was at first postponed for a year and then slashed entirely from the roster of US vehicles.

Mercedes has noted in the message to dealers that the withdrawal applies even to vehicles that had already been ordered by customers, so it’s by no means a course of action aimed to begin by a certain date.

Among other things, the absence of a significant portion of V8-engined models for the 2022 model year should demonstrate just how well Mercedes can rely on its non-V8 offerings during a transition period to electrification. The battery-electric Mercedes EQS sedan will arrive later this year, in addition to other electric models that are on the way. The absence of this number of V8 models in 2022 is also sure to send prices up for remaining 2021 examples on dealer lots, as well as the prices of used models, especially the G-Class. Get ready to see some high asking prices everywhere for V8-engined Mercs.

Will Mercedes-AMG be able to transition away from V8s entirely in the coming years if it had to? Let us know in the comments below.