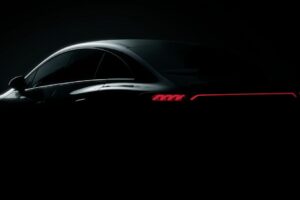 Mercedes-Benz has announced that it will unveil the EQE at this year’s IAA Mobility show in Munich, which is set to take place from September 7 to 12. To go along with the announcement, the German automaker also teased the exterior design of its new all-electric sedan, while giving us a good look at what life will be like inside.

The shadowy teaser doesn’t reveal a whole lot, but we do see some a clear association with the larger EQS, including a distinctive light signature for the taillights and a light bar linking the clusters. The curvaceous body is also somewhat similar, albeit shorter in length, and will be important to ensure a low drag coefficient.

The EQE will be second model based on the company’s EVA platform (also referred to as MEA) and is expected to feature rear- and all-wheel drive electric powertrains. As for the interior, it is again not unlike the EQS, with at least three displays on show here, although it isn’t known if the EQE will get the same Hyperscreen system like its larger sibling. Aside from the EQE, the automaker also has plenty of other things to show at the September event, as there will also be an all-electric sedan by Mercedes-AMG, likely a performance version of the existing EQS.

Joining the AMG EV is the brand’s first performance hybrid parked under its E Performance label, which could either be the Project One or the GT 73 EQ Power+. The list goes on, as there will also be a concept vehicle that “shows how Mercedes-Maybach will enter the age of electric mobility,” which points to a more luxurious version of the EQS SUV teased recently.

It was previously confirmed that the regular EQS SUV will only arrive next year, so the concept will be our first look at the automaker’s upcoming fully electric SUV. Meanwhile, from smart, there will be a show car that previews the first vehicle from the brand’s new generation of all-electric models. Other models that will make an appearance in Munich will be the EQB, S-Class Guard and C-Class All-Terrain, the latter two based on the latest iterations of the automaker’s core models.

The theme of electrification is clear as day, which is in line with the company’s prior announcement that it will transition from EV-first to EV-only. This will see it introduce only fully-electric platforms and models from 2025.