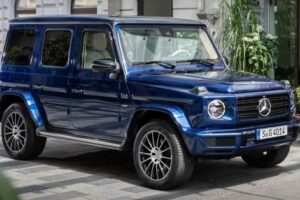 Mercedes-Benz is apparently ready to show off its fully electric G-Class concept at the IAA Mobility in Munich, which swings into action on September 7. According to an Autocar report, the concept is expected to showcase close to production levels of styling and configuration, much like what the automaker did with the Vision EQS.

Drastic design overhauls are not expected, since the G-Class’ iconic looks have remained fairly similar over the past four decades. It will likely get a new one-piece grille, some new wheels and unique light clusters to differentiate itself from the regular G-Class.

An mbpassion report last month said the EQG won’t ride on a dedicated EV platform, but will instead use a converted version of the existing G-Class’ ladder frame platform. Other EQ models that follow this path include the EQA (GLA), EQB (GLB) and EQC (GLC). Adaptations may allow for the potential fitment of the EQS‘ huge 107.8 kWh lithium-ion battery pack (capable of up to 770 km of range), though of course it won’t be quite as aerodynamic as the luxury sedan.

So far, Mercedes-Benz has filed trademarks for the EQG 560 4Matic and EQG 580 4Matic. Both are expected to get all-wheel drive as standard, featuring a dual-motor setup. Outputs for the latter are said to mirror the EQS 580 4Matic, which is rated at 523 PS (385 kW) and 855 Nm of torque.

All EQG variants are expected to maintain a premium focus, so a barebones, utilitarian-spec model is unlikely to be offered. Interior tech appointments should be shared with other EQ models, so it will be getting big displays with MBUX infotainment platform.

While many owners use their G-Wagens for city driving, the EQG will be engineered with true off-road capability. Remember the EQC 4×4 Concept from last year, serving as an impressive technical showcase for a fully electric off-roader? Some of those tech will certainly find their way into the EQG.

Mercedes-Benz development engineer Jürgen Eberle acknowledged that there “remains great enthusiasm for traditional off-roaders.” He also said the EQC 4×4 concept proved that fully electric cars have the ability to go off-roading “in a serious way.”

Despite not being a high volume seller, sales of the G-Class went past 20,000 units for the first time. While that may pale in comparison to the 425,000 units of C-Classes sold, the G-Class’ high list price makes it a consistently reliable moneymaker. Expect the EQG to command a slight premium over the regular G-Class range, though.