Mercedes-Benz EQS to be launched in Thailand this year – CKD locally-assembled, with Thai-built battery – paultan.org 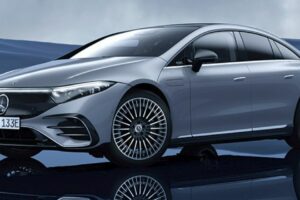 Mercedes-Benz Thailand has announced that it will be introducing its flagship all-electric sedan, the Mercedes-Benz EQS, into the market later this year. Interestingly, the car will go on sale as a locally-assembled CKD model, and will be built at the Thonburi Automotive Assembly Plant (TAAP) in Samut Prakan, making it the first fully-electric Benz model to be built there.

This would also make Thailand the first market outside Germany to produce the model. The company didn’t indicate pricing, or which version of the EQS would be built and sold in the kingdom, although it is likely to be the EQS 450+, which features a single rear motor electric powertrain (eATS) and has 245 kW (333 PS) and 568 Nm of torque. The automaker also has a twin motor EQS 580 4Matic, which has 385 kW (523 PS) and 855 Nm in the way of output.

The company said it had been preparing for the production of electric vehicles, including investing in a battery plant to cater for local production of batteries. The facility, built together with TAAP and Thonburi Energy Storage Systems (TESM), was established in 2019, and is one of the automaker’s nine factories in its global battery production network.

Besides the EQS, the company is also set to launch the Mercedes-Maybach GLS in fully-imported form later this year, and is also preparing to assemble and sell the PHEV version of the W223 S-Class, the S 580 e. It said that it would indicate when these will debut closer to their launch dates.

Closer to home, we hear that there are plans to introduce the EQS for the Malaysian market, although exactly when remains unknown. With Mercedes-Benz Malaysia saying it will continue to await greater clarity on the country’s electrification direction before committing to the cause, it looks like it could be a while more before the EQS comes our way.