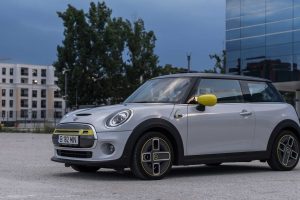 The Mini Cooper SE is rated at 110 miles by the EPA, but you shouldn’t expect to travel more than 100 miles without stopping to charge.

Many reviewers and electric car owners have called out Mini for producing a new EV with just 110 miles of EPA-estimated range. Aside from complaints about the lack of proper charging networks in many areas, electric vehicle range is arguably the most talked-about concern in the segment.

Several years ago, an EV with around 100 miles of range wouldn’t have come as a huge surprise, though there have been longer-range EVs around for years. However, in 2020, and now 2021, there’s really become an unwritten expectation that new electric cars will offer at least 200 miles of range, but the current average seems to hover around 250 miles, with some models capable of well over 300 miles.

The $37,990 Tesla Model 3 Standard Range Plus is rated at 263 miles and the $41,990 Model Y Standard Range offers 244 miles. Vehicles like the Chevy Bolt EV, Hyundai Kona Electric, and Kia Niro EV, among others, all provide around 250 miles of range, give or take. All of these electric models are priced below $40,000, and some qualify for the $7,500 US federal EV tax credit.

The Mini Cooper Electric Hardtop (SE) carries a low starting price of $29,990. If you can take advantage of the tax credit, you’ll pay just ~$22,500 for the car, which is on par with the gas-powered Cooper.

Top Gear secured a long-term Cooper SE to test over time. In its recent report about the car, it shared that it’s not achieving 110 miles of range. Instead, the electric Mini is averaging less than 100 miles of real-world range.

Despite the Cooper SE’s minimal range, it could still prove to be a solid option for some people. It could function great as a second car or a city commuter. Many people drive short-range PHEVs and rarely ever need to use gas. This is because they don’t have a long commute and they don’t use the car for road trips. However, owning a Cooper SE in the States as your only car could prove quite limiting.

What do you think? When considering the price (as long as you can get the full tax credit), is 100 miles of range okay? Would you consider buying the Cooper Electric Hardtop?