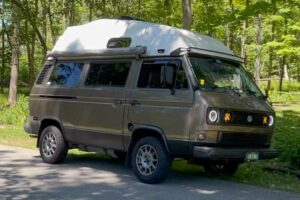 Motorhome adventures and as most people call the “vanlife” has become more popular in the US recently. Sales of recreational vehicles have set a record in 2021, though the quality of these RVs has taken a hit.

That said, going for that adventure-filled lifestyle doesn’t always mean that you need to drive around a massive motorhome. Ryan from Vaan Design Co. shows us how it’s done with his modified 1986 VW Vanagon with this tour, care of Youtube’s Go Small. Live Large! channel.

As you can see, Ryan’s van isn’t huge but you’d be surprised with the myriad of customizations he has done on the inside to maximize the space.

But first, let’s talk about the outside. Donning a bronze beige metallic paint job, Ryan’s Vanagon does come with modern niceties such as LED lighting, along with functional tools for off-roading. The van previously had a pop-top before. He had to swap it to a fixed high-top roof for a more comfortable, standing interior space.

For the power plant, Ryan chose to power his Vanagon with a 2.5-liter Subaru EJ25 engine that makes 165 horsepower. It’s a lot more powerful than the Vanagon’s original motor and according to Ryan, is more reliable as well.

As with most compact motorhomes, the cabin is where the magic’s at. Despite the limited space, Ryan was able to shoehorn a kitchen, a sink, hidden tables, two beds, and even a hidden toilet. Every possible storage and functional space are cleverly utilized, we must say.

This custom Vanagon draws its power from a lithium battery, charged in three ways, namely solar via a total of 180-watts of panels, via DC-to-DC charging while the engine’s running, or by plugging in.