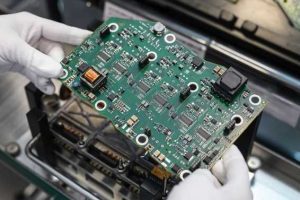 The shortage in semiconductor chips that has affected automotive production is spreading and has now added more names to the list. Last month, a slew of brands reported disruptions in vehicle production as a result of the supply shortfall, with Toyota, Honda, Nissan, Ford, FCA and Audi being those affected.

Now, newly-formed Stellantis, General Motors and Mazda have said that they are cutting production as a result of not having enough chips for cars, Reuters reports.

Stellantis said it will slow production at its Melfi plant in Italy next week due to a shortage of microchips and other parts, and will put over 7,000 workers on furlough. The plant produces the Jeep Renegade and Compass as well as the Fiat 500X.

As for GM, the automaker said it will cut production entirely during the week of February 8 at four plants in North America and Mexico, and will also be running run its Bupyeong 2 plant in South Korea at half capacity next week. Affected GM vehicles include the Chevrolet Malibu, Cadillac XT4 SUV, Chevy Equinox and Trax, GMC Terrain and the Buick Encore. The automaker, which had said in January it was not yet affected by the chip shortage, did not disclose how much volume it would lose, but said the focus is on keeping production running at plants building the highest-profit vehicles such as full-size pickup trucks and SUVs as well as the Chevrolet Corvette. Automotive analyst AutoForecast Solutions estimated GM’s combined lost volume would total almost 10,000 vehicles next week.

Meanwhile, Mazda announced that it expects the chip shortage to affect its vehicle production from this month. Its CEO Akira Marumoto said that based on the current assumption, production will be impacted by around 7,000 vehicles globally in February, but sources told the news agency that the Japanese automaker is considering cutting its global output by a total of 34,000 vehicles in February and March due to the issue.

Ford, which was already affected by the shortage last month, said it will be reducing output of its F-150 pick-up, cutting shifts at two US plants assembling the truck.

Elsewhere, Geely-owned Volvo Cars said that while it had so far avoided the chip shortages that have curtailed production there was still a risk it could be hit. Its CEO, Hakan Samuelsson, told Reuters that the company could be affected soon. “There is of course a big risk that it could come here during the first quarter. But it is very hard to forecast,” he said. Automakers across the world have been caught off guard by the shortage of crucial semiconductors, used for everything for computer management of engines for better fuel economy to driver-assistance features such as autonomous emergency braking.

The issue has highlighted the need to cut dependency on Asian manufacturers. Taiwan, home to the world’s largest contract chip maker, Taiwan Semiconductor Manufacturing and other major tech firms, is at the centre of the issue. Chipmakers have been attempting to keep up with the substantial increase in global demand brought about by a massive surge in consumer spending on electronics, gaming consoles and smartphones since the Covid-19 pandemic began.

Bosch and German chipmaker Infineon warned the problem will only get worse this year for the industry. Bosch, which in December had echoed the alarm first sounded by Volkswagen, said it had not been left unscathed from the effects of supply chain bottlenecks, and said the ongoing Covid-19 crisis and the chip shortage would weigh on global automotive production growth in 2021.

It estimates that around 85 million vehicles will roll off assembly lines around the world this year, more than the 78 million produced last year, but still below the 92 million units in 2019. Meanwhile, Infineon said it was facing challenges in meeting demand from automakers for microchips due to capacity constraints at the contract manufacturers it relies on.