Home » Car Reviews » 'Motor shows won't be killed off, but they must drastically change'

'Motor shows won't be killed off, but they must drastically change' Mike Rutherford thinks motor shows will still exist in the future, but are likely to become shorter and less expensive to stage 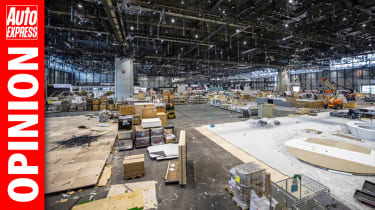 The maddest, saddest and baddest (in financial terms, at least) car exhibition I’ve ever been involved with? Undoubtedly, the one I was due to attend earlier this month.

Traditionally, the Geneva International Motor Show – or GIMS as the organisers inelegantly call it – is the best and most glamorous indoor car exhibition on the planet. But not this March, it wasn’t. Oh no. The Swiss Government binned the occasion due to the coronavirus outbreak.

Yet still the show went on (well, sort of) for me and a handful of other anoraks who experienced it virtually, on laptops or phones while we were perched at our office desks, kitchen tables or in stationary cars. I chose to position myself in front of a soon-to-be-outlawed wood-burning stove.

Genuinely, I tried to get into the Geneva groove on what should have been press day. I even munched a Toblerone breakfast and sipped a typical Swiss beverage (lukewarm water with an iffy tea bag on top), followed by a cheese fondue lunch.

But, being honest, none of the above worked for me. Not the food and drink, nor the unveiling ceremonies, press conferences, Q&A sessions, interviews. Or the other important car-exhibition stuff that somehow works live on the show floors, but fails miserably when cobbled together at the last minute and delivered – in German, Italian or English – via small laptop screens or, worse still, even smaller mobile phones.

Yet despite Geneva 2020 being axed at the last minute, it and the imminent untried/untested Munich Show, the desperate Detroit event, plus the biennial Paris bun fight will not be killed off. They must drastically change. I suspect they’ll become shorter, less expensive to stage, and more like business, industry, conferences, green gatherings than places for punters to have a day out with like-minded petrolheads, diesel diehards or EV evangelists. Those consumers will gravitate towards car exhibitions that are more about selling, compared to those that focus on talking, posturing or going overly ecomental.

Each year, the New York Auto Show attracts around a million local car users, many of them willing and able to sign on the dotted line when inside and being professionally sold to. Brussels is smaller, closer to home, and does a similar selling job. Closer still will be the reborn British Motor Show at Farnborough this August and – hopefully – beyond.

All in, it can cost a car maker about 2 million Euros per brand/stand to be at a prestige-class show such as Geneva. So for a multi-marque firm such as Fiat Chrysler, this could mean a bill of 10m-plus Euros – all to place static cars on the carpeted floor of the huge, barn-like buildings. Is that good value for money in a Switzerland where taxi fares and hotel rooms are already prohibitively expensive? Increasingly, the answer to that is ‘no’.

I’ve even heard folk argue that ‘tin-box’ exhibition halls in cities should go the same way as Earl’s Court – once home to the London Motor Show, but now a busy housing estate. Trends such as this can only make life even tougher for the future of motor shows.

Do you agree with Mike? Let us know in the comments section below…