Motorist jailed after being caught driving while disqualified 10 times 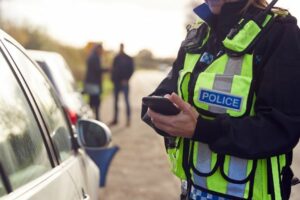 A motorist caught driving while disqualified in Wales has been jailed for almost five months because it was the tenth time he had committed the offence in as many years. Russell Gerald Evans, 33, was stopped by police officers driving a Ford Transit van in Leighton, near Welshpool in February.

A check showed that not only was he banned from driving, but that astonishingly it was his tenth offence of driving while disqualified in 10 years.

He admitted the offence when appearing at Chester Magistrates’ Court last week where he was jailed for 18 weeks.

A court statement read that the reason for imprisonment was due to “the offence being so serious because the defendant has a flagrant disregard for court orders, because it is the defendant’s 10th offence of driving while disqualified in as many years, and only a custodial sentence can be justified”.

Evans was also disqualified from driving for a further four years and 63 days, and must pay a surcharge of £128.

Evans also admitted three other charges at the hearing, including failing to provide a specimen of blood for analysis when he was stopped, as well as driving without insurance and failing to surrender to bail.

The fail to surrender charge relates to Evans not attending Welshpool Magistrates’ Court this month following his arrest.

But Magistrates ordered no separate penalty for these offences.

According to Forbes Solicitors, driving whilst disqualified is a very serious criminal offence and could have severe consequences.

If a motorist is disqualified from driving, and fails to adhere to the driving ban, they will be arrested and taken to the police station for questioning.

After a Police interview, they may be released on bail before a Court date.

It is the responsibility of the police to prove two things; that the person was in fact driving a vehicle and that at the time of driving the vehicle, they were serving a driving disqualification.

Driving whilst disqualified is an ‘absolute offence’ which means there are few valid defences.

If someone can prove that they were not driving the vehicle whilst disqualified, they could avoid being prosecuted.

Anyone found guilty of driving whilst disqualified could face a fine of up to £5,000 plus up to six penalty points on a driving licence.

Other punishments could include a community service order, a curfew being imposed or 12 months imprisonment.

The disqualification period will reflect the seriousness of the offence and could last for six months if the driver gets 12 or more penalty points within three years.

In some cases, a plea for exceptional hardship can be made.

If a driver is disqualified for more than 56 days, they will have to apply for a new licence and take a discretionary or extended retest.