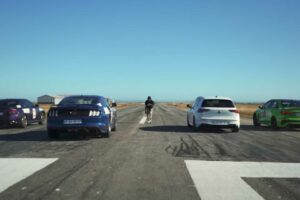 The Ford Mustang has the power to dominate at the drag strip. However, effectively using all those ponies can be challenging for the car. A new video from the CAR YouTube channel reveals that the right competitors – the BMW M240i, Volkswagen Golf R, and Audi RS3 – can capitalize on the Mustang’s struggles and ride them to victory.

The Mustang makes the most of the group thanks to its big, naturally aspirated 5.0-liter V8 engine. It produces 442 hp (330 KW) and 390 lb-ft (529 Nm) of torque, channeling it through the 10-speed auto exclusively to the rear wheels. That’s great for burnouts, but it’s also the car’s Achille’s heel. Good traction at the start of a drag race is the key to victory, and pumping 442 hp through two tires isn’t enough when your competitors power all four of theirs.

The Mustang struggled for traction compared to its competitors. The Audi, BMW, and Volkswagen rocketed off the line, appearing to leave the Mustang in the dust. The Ford didn’t have a chance at recovering in the quarter-mile race, crossing the finish line last with a 12.9-second time.

The RS3 bested the bunch with a 12.0-second time, shaming the BMW again, which needed 12.2 seconds to complete the race, 0.2 seconds quicker than it performed in its other outing. The Golf took third with a 12.6-second time.

It’d be interesting to see the four compete in a rolling race. Eliminating the start would significantly help the Mustang, allowing it to better use its power against the three German cars. The Mustang makes a lot of power, but it’s pretty useless when most of it goes up in tire smoke.