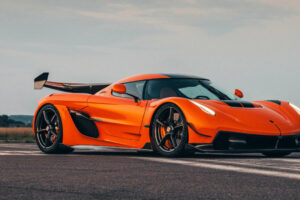 Koenigsegg has built the first pre-series production version of the Jesko, with customer deliveries expected to arrive early next year

Koenigsegg is gearing up for the launch of the new Jesko hypercar. The 1,578bhp rival for the Bugatti Chiron SuperSport and Aston Martin Valkyrie will soon enter production, with customer deliveries due to arrive in spring 2022.

The Jesko in these images is the first pre-series production car the company has built – and the lairy orange paint job is a call-back from one of Koenigsegg’s early hypercars, the CCR.

Just 125 examples of the Jesko and Jesko Absolut will be built. Each will be powered by a twin-turbocharged 5.0-litre V8 engine, which produces 1,262bhp on regular petrol or a whopping 1,578bhp on E85 biofuel (providing you can find it in your area). Torque also ranges from 1,000Nm to 1,500Nm, depending on the fuel you use.

The engine sends drive to the rear wheels through an all-new nine-speed gearbox, which Koenigsegg has dubbed the “Light Speed Transmission.” As suggested by its name, it was designed to be the world’s fastest shifting gearbox.

It has seven wet multi disc clutches and some sophisticated software which can anticipate the driver’s intentions and line-up the best gear for the conditions. Also, as there’s almost as many clutches as there are gears, Koenigsegg says both up- and down-shifts are virtually instant, even if the driver skips gears.

The hypercar is built around a carbon fibre/kevlar monocoque and, to control the engine’s vast reserves of power, there’s adjustable shock absorbers, enormous brakes, a three-stage traction control system and double wishbone suspension on all four corners.

There’s an active rear-wheel steering system, too, which Koenigsegg says will increase the Jesko’s agility around town and on the track. So, at low speeds, the rear axle counter steers the front wheels to tighten the hypercar’s turning circle. At higher speeds, both wheels turn in the same direction to improve stability.

Despite being designed for the racetrack, the Jesko gets a relatively plush interior, with creature comforts such as climate control, a wireless smartphone charger and a nine-inch infotainment screen with features like Apple CarPlay, a G sensor and a parking camera.

Buyers also have a choice of either leather or Alcantara upholstery, while the steering wheel comes with a pair of tiny touchscreens mounted where the driver’s thumbs fall – these allow control of everything from the stereo and cruise control, to the car’s ride height.

Koenigsegg also says the Jesko will be easier to live with than any of its previous hypercars. The carbon fibre tub is larger than before, meaning there’s more space inside, and the mad scissor doors, engine cover and bonnet are all hydraulically operated.

What are your thoughts on the new Koenigsegg Jesko? Let us know in the comments section below…