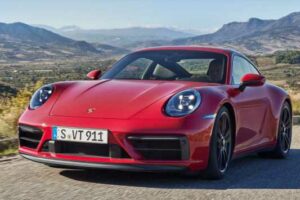 This is the new Porsche 911 GTS, the latest go-between model for 911 Carrera buyers who want performance, but without the track-bred compromises of the GT3 model.

The 911 GTS is powered by an uprated version of the twin-turbocharged 3.0-litre flat-six engine used in the 911 Carrera and Carrera S, with an extra 29bhp and 40Nm of torque compared with the latter’s output. That boosts the GTS to 473bhp and 570Nm, which Porsche says is enough for a 0-62mph time of 4.1 seconds and a top speed of 193mph, when equipped with a manual gearbox.

The engine sends drive to the rear wheels via a seven-speed manual gearbox as standard, although an eight-speed dual-clutch automatic is available as a no-cost extra. Spec the latter ‘box and the GTS’s 0-62mph time is cut to 3.4 seconds. Four-wheel drive is also available for an extra £5,580.

Chassis changes for the GTS model over the Carrera include stiffer springs, a 10mm lower ride height, plus new shock absorbers and anti-roll bars. It’s also equipped with new helper springs on the rear axle’s suspension, which help keep the wheels in contact with the road over bumpy surfaces to improve grip and traction.

Like the old Porsche 911 GTS, this new model gets a sportier look compared with the 911 Carrera. The body kit includes a new front apron and a lower front splitter, while other highlights include a new sports exhaust system and some staggered satin black alloy wheels, sized at 20 inches on the front axle and 21 inches at the rear.

The car’s interior is almost identical to the standard 911, albeit with some Race-Tex microsuede upholstery. Porsche also offers an optional lightweight package, which shaves 25kg off the car’s kerb weight by removing the rear seats and fitting a lighter battery and thinner glass.

Buyers will also get Porsche’s latest PCM 6.0 infotainment system, which comes pre-loaded with a virtual race coach and a database of 300 worldwide race tracks, complete with a lap timer and mapping for the recommended racing lines.