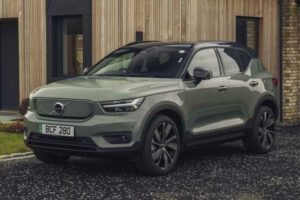 Volvo has revised the electric XC40’s pricing and trim-level structure, with a simplified three-tier system

Volvo has revised the pure-electric XC40 Recharge range’s trim structure, offering buyers of its all-electric SUV more choice. The XC40 EV is available to order now with prices starting from £49,950, which makes it a direct rival for the upcoming Tesla Model Y.

Since the XC40 Recharge’s initial release earlier this year, Volvo no longer offers the car in R-Design trim (a nameplate used by its combustion engined vehicles) and instead offers a unique trim-level structure.

Inside, there’s dual-zone climate control, a wireless smartphone charging pad, a 12.3-inch digital dash and a nine-inch infotainment system, which is powered by new Google-developed software rather than Volvo’s in-house Sensus system.

Twin Plus cars are priced from £52,950 and get front parking sensors, a rear parking camera and a handful of interior upgrades, such as electric seat adjustment, a heated steering wheel and heated front and rear seats. There’s also a more efficient heat pump, which Volvo says can better heat and cool the cabin in extreme conditions.

Despite this, Volvo says that most XC40 Recharge customers won’t buy their cars outright, with 95 per cent expected to opt for one of the brand’s new subscription programmes. With the cheaper Care by Volvo Fixed plan, buyers can have an XC40 Recharge for £619 per month on a three-year term, with no deposit or sign-up fee required.

There’s also a Care by Volvo Flexible plan, which starts from £769 per month. It’s an open- ended contract with a 30-day trial period meaning, if you’re not satisfied with the car at the end of the month, you can hand it back to Volvo hassle-free.

However, there’s also an extra get-out clause as, if you find the XC40 Recharge doesn’t suit your needs after the trial period expires, you can either swap it for a different Volvo or hand in a notice and terminate the contract after three months.

Like the combustion-engined XC40, the Recharge is based on Volvo’s Common Modular Architecture (CMA). However, instead of a combustion engine, it uses a 78kWh battery pack mounted under the cabin floor, and an electric motor on each axle.

The system has a maximum output of 402bhp and 660Nm of torque, which Volvo says is enough for a 0-62mph time of 4.9 seconds. More importantly, the XC40 Recharge offers a claimed 259 miles of range thanks to a recent software update.

When connected to a 150kW DC rapid charger, the battery pack can take on an 80 per cent charge in around 40 minutes. A full recharge using the SUV’s on-board 11kW AC charger takes a little longer at eight hours.

Volvo is also keen to stress that, as the XC40 Recharge’s electric powertrain is smaller than a combustion engine, there’s space for a 31-litre storage bin under the bonnet, which is well-suited for carrying the car’s charging cables. The cabin space is also unchanged over the standard car.

Eventually, Volvo will introduce a less powerful front-wheel-drive version of the XC40 Recharge, which should drop the car’s price-tag well below the £50,000 threshold. However, details on this new model are still yet to be confirmed.

This XC40 EV also heralded the arrival of Volvo’s electrified Recharge sub-brand, under which all of the firm’s plug-in models will sit. The most recent addition to the line-up is the pure-electric C40 Recharge, which is a more rakish crossover based on the same CMA platform as the XC40 Recharge.

Volvo will introduce four more electric cars over the next five years, with the company aiming for electric vehicles to account for 50 per cent of its sales by 2025. The Swedish brand also plans to only sell electric vehicles from 2030 onwards.

Volvo also made the decision to move all sales of its pure-electric cars online, in an effort to increase profitability in the electric age.

Lex Kerssemakers, Volvo’s Global Operations Chief said: “We want to offer our customers peace of mind and a care-free way of having a Volvo, by taking away complexity while getting and driving the car. Simplification and convenience are key to everything we do.”Now read all the latest news on the new Volvo C40 Recharge crossover. Let us know your thoughts in the comments below…