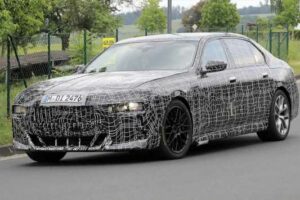 The seventh-generation BMW 7 Series is drawing nearer to production, with these latest images offering a slightly closer look at some of the saloon’s more intricate design details.

BMW’s new flagship limousine will reach showrooms next year, sporting a bold new styling language and a range of hybrid and pure-electric powertrains. However, it’ll enter a shrinking market. Now that Jaguar has axed the pure-electric XJ, the saloon’s only direct competitors (luxury limos that can be specced with either hybrid or pure-electric power) will be the new Mercedes S-Class and its EV equivalent, the EQS.

Our latest 7 Series mule wears slightly less camouflage around its front splitter, giving us our first look at the new vanes in the saloon’s lower intake. BMW’s new low-mount headlamps (which will also feature on the facelifted X7) are now a little less obscured, too.

The rest of the car is still heavily masked off, with the rear end wearing stand-in tail lights and extra cladding on the bumper. We can pick out details in the rear valance, though, such as some diffuser-like creases below the number plate and the frenched-in quad-exit exhaust.

BMW hasn’t yet released any technical specifications for the hybrid-powered 7 Series or the pure-electric i7. However, for the latter car to keep pace with its EV rivals, it’ll need to have a range of at least 300 miles. The recently launched Tesla Model S Plaid can cover a claimed 390 miles between charging stops, while the Audi e-tron GT can manage 298 miles.

Figures like those should be attainable for BMW. The i7 will be powered by the company’s fifth-generation eDrive technology, a variant of which also appears in the iX3 SUV. The system groups the electric motor, transmission and associated electronics into a single bolt-in unit, which reduces the overall mass and size of the system, while dramatically speeding up production times.

The new BMW i4, which also uses the firm’s fifth-generation eDrive system and 80kWh battery, can cover 367 miles on a full charge. We expect the electric 7 Series will get the same 523bhp twin-motor powertrain, while the extra space between the larger saloon’s axles could be filled with more cells to further boost the car’s maximum range.

Combustion engine options for the BMW 7 Series will continue, too – the EV version will be just one of four different drive technologies available. Buyers will get the choice of diesel or petrol engines with either 48-volt mild-hybrid or plug-in hybrid technology, in addition to the full battery-powered option.

The BMW 7 Series (along with the updated X7) will be one of the formative models in the German brand’s new-look line-up. The limousine’s front end is unlike anything else in BMW’s line-up – the kidney grilles have shrunk compared with the old model, while the streamlined nose references BMW’s latest pure-electric model, the BMW iX.

The rear of the car is a little more conventional, with the only major changes being a slightly taller bootlid and reshaped bumper. Like the current model, the new 7 Series should be available in either short or long wheelbase body styles.

Inside, BMW’s new flagship saloon will likely feature the same technology destined for the X8 SUV. That means dual 12.3-inch displays up front, (one for the infotainment system and one for the instruments), which you can just make out in our pictures.

BMW recently confirmed that the BMW Group (which includes MINI and Rolls Royce) will bring 25 electrified vehicles to market by 2023, more than half of which will use a fully electric powertrain. The firm hopes the move will drop the average emissions of its entire range by more than a third.

The German brand will realise this plan by building its next-generation fleet on flexible platforms, which support pure-electric, plug-in hybrid and combustion-engined powertrains.

We’ve seen this already with the new BMW X3 and iX3. It’s one of the most diverse model lines in the company’s range, offering buyers a choice of petrol, diesel, mild-hybrid, plug-in hybrid and all-electric powertrains.

All versions share the same basic CLAR Cluster Architecture platform, with the required hardware for the hybrid and all-electric variants being bolted in as necessary. The idea will also soon be expanded to include the 3 Series, with a pure-electric version of the compact executive saloon expected to arrive later this year.

Now read all the latest news on the upcoming BMW X8 SUV. Let us know your thoughts in the comments below…