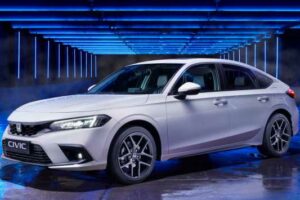 The all-new 11th-generation Honda Civic has been revealed in European specification. Base versions will only be offered as a hybrid model using Honda’s e:HEV technology, but a hot Type R version is in the pipeline too.

We’ve already seen the new Honda Civic in US-market form as a saloon but the new hatchback variant shows us what UK buyers can expect when it goes on sale in Autumn this year.

The 2022 Civic is somewhat toned down from the current model with no fake vents, fewer slashes and an overall cleaner look. At the front it’s unsurprisingly the same as the saloon, but the big changes compared to that variant are at the rear with what Honda says is a fast-back design. This results in a much larger boot opening than the saloon courtesy of the hatchback shape.

The estate model was ditched with the 10th generation Civic and it’s not likely to return with the new model. The wheelbase has been extended by 35mm over the tenth-generation hatchback with a wider rear track, too, for greater cornering stability.

The launch of the hybrid Civic means Honda’s European lineup is now fully electrified. The e:HEV name has already been used on the hybrid Jazz, CR-V and HR-V but in the Civic the powertrain will be a newly developed 2.0-litre Atkinson-cycle engine. With the 72-cell lithium-ion battery, dual electric motor system and engine combined, the powertrain pumps out at 181bhp and 315Nm of torque with WLTP-rated CO2 emissions at under 110g/km.

The switch to hybrid power means Honda will have a more direct rival to the Toyota Corolla and Hyundai Ioniq.

The Civic has been available as a hybrid in other markets before, but this will be the first time a hybrid Civic hatchback will be made available to UK buyers, discounting the short-lived, standalone Civic Hybrid saloon. It’ll also be the only powertrain option – discounting the upcoming Type R version which we expect will retain the outgoing hot hatch’s 316bhp 2.0-litre turbocharged powertrain.

Driving modes range from Eco, Normal, Sport and Individual which can allow the Civic to switch between fully-electric, hybrid and engine-only power.

There are three trim levels to choose from; Elegance, Sport and Advance. Pick the range-topping Advance model and inside you’ll be greeted by a 10.2-inch drivers’ display LCD panel and a BOSE 12-speaker sound system. There’s also a new nine-inch central touchscreen as standard with Apple CarPlay and Android Auto compatibility.

Production of the new Civic will take place in Japan, with Honda recently selling the Swindon plant where previous generations have been built. No prices have been announced for the UK but we can expect it to sit around the same price point as the recently updated £28,625 mild-hybrid Ford Focus.

Check out the latest Honda news and reviews here…