New 2023 Audi Q5 to stick with petrol and diesel power 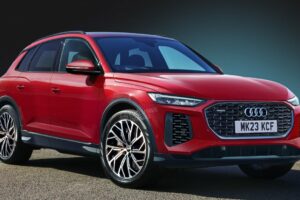 The next-generation Audi Q5 SUV is set to arrive with ICE and plug-in hybrid powertrains, but there will be no full EV. Our exclusive images preview how it could look

One of Audi’s SUV stalwarts is due to be replaced next year, for a final time before the brand’s European sales go fully electric in 2030. It’s the new Audi Q5 – the German firm’s rival to the BMW X3 and Mercedes GLE. The mid-size SUV will enter its third generation in 2023, and it’s already been spied deep into its development programme.

While the larger Q7’s introduction in 2006 fired the starting pistol on what has become the expansive and arguably niche-filled Audi SUV line-up we have today, the Q5 remains the bedrock of the brand’s success in the SUV market. Globally, there isn’t a single Audi nameplate that sells in higher volumes, with nearly 300,000 deliveries worldwide in 2021 making it not just the German manufacturer’s most popular Q-badged model, but also its biggest seller outright.

It’s difficult to overstate the importance of this model, then. This is not a vehicle designed with one particular market in mind. It has to be popular in Europe, China, North America – virtually anywhere in the world that the brand operates.

Perhaps that would explain why current spy shots point to an evolutionary design language for the Q5, rather than an all-out clean-sheet rethink. Our pictures of development prototypes reveal a car that’s still based around a large octagonal grille flanked by slim headlights, but its nose appears taller and more squared off, for a tougher look. Stronger shoulders will be complemented by a rear end that features a full-width LED lighting bar instead of the current model’s split tail-lights.

The next Q5 doesn’t look too different in size from the current-generation car, with a similar wheelbase plus front and rear overhangs. Our exclusive images preview the regular version of the Q5, but a coupé-shaped Sportback model would seem a likely bet, too, given that Audi introduced this body shape for the current-generation Q5 only last year. Sportback styles appear to be exempt from a reduction in complexity in the brand’s combustion-engined car portfolio, as announced in 2019.

Inside, and in contrast to the evolutionary exterior, a next-generation cabin layout with brand-new infotainment and switchgear is feasible. Audi has never been a manufacturer that has stood still from generation to generation when it comes to its cabin architectures.

The brand has already electrified the Q5 nameplate with the arrival of the MEB-based Q5 e-tron in China, but this model is unlikely to come to Europe. In fact, conforming to Audi’s electrification strategy in Europe, there’ll be no next-generation Q5 EV. Instead, the new car will remain on a combustion-engined platform, with an evolution of the brand’s current MLB architecture employed for the next model. However, we can expect substantial upgrades for the platform, because it will host one final generation of combustion-engined models for Europe, described to Auto Express by technical boss Oliver Hoffman as “the best” Audi has ever launched.

At the time, Hoffman was outlining the technical basis of the next-generation A4 to us – a car also due in 2023 on the updated MLB architecture. Fundamental to the platform’s new offering will be an updated version of the Volkswagen Group’s well known EA888 2.0-litre turbocharged petrol engine, with 48-volt mild-hybrid technology and revised turbo systems.

Need to sell your car?

Diesel power remains popular in the Q5, and an updated 2.0-litre TDI option – also with a new development of the 48-volt tech offered on the current model – will almost certainly arrive as part of the offering. We can expect the SQ5 to stick around for another generation, too, also embracing 48-volt tech but allied to a turbocharged 3.0-litre V6, likely to develop more than 350bhp.

Electrification will play a starring role in the next-generation car, too, but beyond the expanded mild-hybrid offering, plug-in hybrid tech is as far as the Q5 will extend.

The current 50 TFSI e quattro already weighs in with a 17.9kWh battery, enabling up to 37 miles of electric running. It works with a 2.0-litre turbo petrol engine and an electric-motor system for a total power output of 295bhp and CO2 from 35g/km. Again, we expect incremental refinements to this system for the new-generation car.

A fully electric Q5 for this region won’t happen until the brand’s entire European portfolio is electric only. However, Audi will offer a full EV in the Q5’s sector, not long after the combustion car goes on sale. The Q6 e-tron is expected to arrive in 2024, positioned and priced similarly, but using the PPE platform for EVs. It’ll share this technical basis with the upcoming A6 e-tron saloon, as well as Porsche’s next-generation Macan.

Although Audi has already talked a lot about the Q6 e-tron, the Q5 – not yet touched upon by brand execs – will come first. We understand that a reveal next year with sales also to start in 2023 is targeted, but most likely towards the end of next year. As such, the Q5 will not make its debut for around 18 months. Prices should increase slightly over the current car’s c.£46,000 starting price given the new Q5’s extra tech.