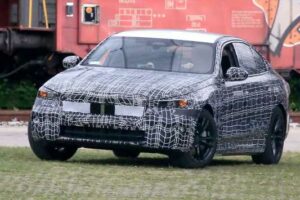 Our spy photographers have spotted the next-generation BMW 5 Series in the midst of its development programme for the first time. It’ll reach showrooms in 2023 with the option of a pure-electric i5 variant, which will allow it to compete directly with the upcoming Mercedes EQE and the recently revised Tesla Model S.

The all-electric BMW 5 Series will follow the iX3 crossover, i4 saloon and larger iX SUV into the showrooms – and, like those cars, it’ll carry an “i” prefix before its model number to set it apart from the petrol, diesel and plug-in hybrid variants that will also appear in the range.

The new BMW 5 Series shares elements of its design with the upcoming 7 Series, featuring the same narrow headlamps and a similarly aggressive nose. Unlike some of BMW’s recent offerings, such as the 4 Series, the kidney grilles have been kept to a sensible size.

Overall, the styling tweaks appear to be evolutionary rather than revolutionary. The new car looks much like the current model in profile, and the rear end retains most of the same lines – right down to the dinky ducktail spoiler atop the bootlid.

The current G30 5 Series is based on BMW’s modular CLAR underpinnings, which uses high-strength steels and lightweight composites in its construction. This eighth-generation model will probably use an updated version of the same platform and, given that the iX3 SUV makes use of similar underpinnings, the EV tech is likely to be carried over, too.

The iX3 was the first BMW to feature the firm’s fifth-generation electric drivetrain. In the SUV, it consists of a 282bhp electric motor mounted on the rear axle and an 80kWh battery pack, which is good for a range of 285 miles. However, the electric 5 Series could push this range figure past 300 miles, thanks to its more aerodynamic body.

The BMW Group has already announced that it’ll launch 25 new electrified models across its range of brands by 2023, with roughly half of those ditching the internal combustion engine altogether. BMW has also confirmed that other models in its core line-up will get pure-electric variants, including the X1 SUV and the 7 Series limousine, with electric power featuring alongside the next-generation combustion-engine and plug-in hybrid options.

Where regular engines do continue, 48-volt mild-hybrid tech will be employed to help further improve fuel efficiency and trim CO2 emissions. As such, we’re expecting some of the 5 Series’s 2.0-litre petrol and diesel engines to make it on the next generation, residing towards the lower end of the saloon’s line-up.

The car in these spy shots is powered by a plug-in hybrid powertrain, as hinted by the extra filler door on its front left quarter panel and the “hybrid test vehicle” stickers dotted around its body. We’re expecting a couple of PHEV systems for the new 5 Series, which will more than likely be evolutions of the powertrains found in the current 530e and 545e.

The 530e is based around a 2.0-litre four-cylinder petrol engine, while the 545e uses a 3.0-litre straight six. In the current car, the former unit produces 248bhp, while the latter has 387bhp – and both of those figures should increase slightly across the generation change.

More importantly, BMW could also seek out a little more pure-electric range from each powertrain. When the 530e was updated in 2019, BMW squeezed an extra 2.8kWh of energy capacity from the system’s battery pack with no increase to its physical size. The result was 37 miles of electric range from a 12kWh battery pack

This efficiency could be increased further as BMW refines its battery chemistry on the way to its ultimate goal of producing solid state battery packs. The technology will be on the road by 2030 in the company’s sixth-generation electric vehicles.

What will the new BMW i5 have to beat? These are the best electric cars on sale right now…