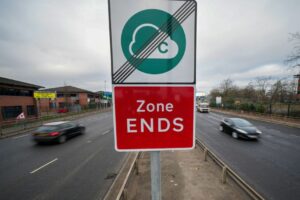 UK drivers are encouraged to give their knowledge of the Highway Code a refresher – alongside the new Clean Air Zones, they could be caught out by the implementation of a couple of recently updated driving laws. Just 40 percent of Britons feel “very familiar” or “fairly familiar” with the Highway Code, though it’s important to ensure their knowledge is regularly updated.

Numerous Clean Air Zones have already launched including Bath, Birmingham and Portsmouth in 2021 and Bradford earlier in 2022.

Bristol was the most recent city to launch its Clean Air Zone on November 28 last year, with private petrol and diesel cars being charged £9 to drive in the zone

Many councils are keen on implementing new Clean Air Zones, with Tyneside and Sheffield launching charging areas this year.

Allan Hetherington, Head of Prestige Car Finance at Anglo Scottish Asset Finance, commented on the Clean Air Zones and how drivers may be hit with fines.

He said: “Many drivers are concerned about rule changes regarding Clean Air Zones because of the varying introduction dates and classes.

“But they’re also surprised to find their existing knowledge of motoring law isn’t up to scratch.

“There are plenty of driving nuances that could land you in hot water with the law, so we always recommend staying up to date with the latest law changes.”

Drivers in the North East of England are being urged to check their vehicles this month before charges are levied on polluting vehicles.

The Tyneside (Newcastle and Gateshead) Clean Air Zone was launched in October 2022, with cameras in operation and signage around the area.

However, motorists haven’t had to pay yet, with charges only being introduced later this month on January 30, 2023.

Charging will be introduced in two phases – with non-compliant taxis, private hire vehicles, buses, coaches and HGVs being charged from January.

Vans and light goods vehicles will not face charges until July 2023 to allow extra time for vehicle replacements, which are currently affected by a national supply shortage.

Non-compliant lorries, buses and coaches will be hit with £50-a-day tolls, while the worst polluting vans and taxis will be charged £12.50 per day.

Sheffield will be the next area after Tyneside to launch its Clean Air Zone on February 27, with the date being confirmed by the Council in December.

It is a class C chargeable zone for the most polluting large goods vehicles, vans, buses, coaches and taxis that drive within the inner ring road and city centre.

Polluting vans, LGVs and taxis will be charged £10 per day, while coaches, buses, lorries and HGVs will see a £50 charge.

Due to the cost of living crisis, all local light-good vehicles and taxi hackney carriages will be exempt until June 5, 2023.

Greater Manchester’s CAZ was originally meant to be up and running in May 2022, but was postponed in February the same year, with the Government saying it would allow for a consultation.

Transport for Greater Manchester submitted a revised proposal for the Clean Air Zone in July, but has claimed that the Government has not yet responded. If it goes ahead, it is due to be the biggest Clean Air Zone in the UK and one of the largest emissions-based charging zones in the world.

Manchester Mayor Andy Burnham said the scheme had become “unworkable” after the pandemic, saying that no charges should be levied on any vehicles. It is not yet clear whether the Clean Air Zone will be launching in 2023 and whether charges for vehicles will be involved.