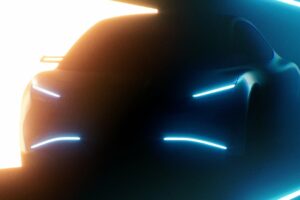 This is our first look at a car from new brand Aehra. It’s an all-electric SUV aiming to take on the luxury car segment. Based in Milan, Aehra says it blends “Italian design, world-class engineering and US customer service”.

The EV brand plans on bringing the SUV and an all-electric saloon to market in 2025 and these new images show us the kind of design we can expect from the fledgling brand. The saloon will be revealed in February next year and beyond that a third model, a 2+2 sports car, will be shown, although a reveal date has not yet been outlined.

For an SUV, the Aehra looks remarkably sleek in its proportions. There’s also not a lot of hard edges to the design, although the quad headlight signature at the front looks fairly aggressive.

At the rear there’s another quad light arrangement with the lights stopping just short of becoming a full-width LED bar. Perhaps the biggest design shock is the use of gullwing doors at both the front and the rear.

We’ve seen four-door cars incorporate this before with the Tesla Model X’s rear gullwing design and the Koenigsegg Gemera’s single design, but this could be the first time four individual gullwings have been utilised.

“The unveiling of the preview images of the first Aehra model, just four months after the launch of the company, certifies that we remain firmly on track,” said co-founder, chairman and chief executive officer, Hazim Nada. “We now look forward to revealing the full design and name of the vehicle in October.”

The firm claims its SUV will feature “leading-edge battery platform technology, targeting a range of at least 800km (497 miles) and awe-inspiring performance”. It should also be able to accommodate “four full-size NBA players, while leaving room for a six-foot adult in the middle of the rear seat row”.

There will be one platform underpinning both the SUV and saloon and we can expect a battery capacity of 120kWh in both. This means the saloon should offer a similar if not greater range than the SUV model. The two will utilise a lightweight carbon-fibre monocoque chassis to help reduce vehicle weight and enhance range. Aehra says both will offer “exceptional agility and driving pleasure”. Charging should be up with the fastest in the EV world with plans for market-leading 850V architecture.

In an exclusive interview with Auto Express, Nada said, “The UK will be an important market for us. We’re going to start with the North American market, Europe and the UK. The second stage will be dedicated to the Gulf countries and China”.

Aehra isn’t looking too closely at potential rivals however. “We have a price bracket in mind, so we’re targeting high premium, $160,000 to $180,000, so at that price you obviously have the Porsche Taycan, Lucid Air, Mercedes EQS, but we’re not similar to those products, we’re quite transversal in terms of which markets we want to reach. We don’t have a specific benchmark.”

We can expect the latest safety systems to be fitted to Aehra’s cars and although the firm is looking into autonomy, Nada says full autonomy is not a priority. In terms of production he said, “we’ll target 20,000 to 25,000 (globally) per year, per model, which is quite ambitious in that segment, but we’ll have plenty of demand in the first two phases of market expansion”.

Aehra also has an eye on the environment in the way its cars will be built. Nada stated, “The production method of our cars will allow for components to be recycled, the materials we’ll use will be more environmentally friendly and in terms of structure and body, it will be 100% (recyclable)”.

The full reveal of the SUV is scheduled for October. The design of both vehicles will be undertaken by Aehra’s chief design officer, Filippo Perini, who is the former director of Lamborghini’s Centro Stile design centre in Sant’Agata. His design back catalogue includes Lamborghinis such as the Aventador, Murciélago, Huracan, Urus and Reventon.

Once the cars are on sale, customers will be able to purchase them online or through the ‘salons’ from which Aehras will be distributed.

Check out the best electric cars to buy here…