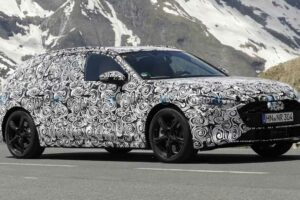 Fresh spy shots have captured the next-gen Audi A4 Avant performing brake tests in the Austrian Alps. The new pics show Audi continuing to hide the wagon under a full-body camouflage wrap, but as we approach its launch, we’re beginning to learn more potential details about the new model.

The new A4 will likely arrive riding on a modified version of the MLB platform that underpins other VW Group models. Audi modified it to accommodate an electric motor, as the new A4 will arrive with mild-hybrid assist. However, rumors also point to the automaker using its turbocharged 2.0-liter four-cylinder EA888 gasoline engine in the model that’ll get big upgrades. It’ll pair with either an eight-speed automatic or a seven-speed dual-clutch gearbox.

Audi will offer in the A4 a range of gasoline and diesel engines, but we’ll also see them electrified. That includes plug-in hybrids and full-electric variants. There are rumors of a hybrid RS4 that’ll deliver far more than the current model’s 444 hp (331 kW).

According to our spy photographers, an all-electric A4 E-Tron will ride on the PPE platform instead of the MLB, and the EV will sport unique front-end styling, like a closed-off grille. It’ll come in both single- and dual-motor configurations, with an RS variant allegedly delivering 475 horsepower (354 kilowatts) and 590 pound-feet (800 Newton-meters) of torque.

While there might be some big surprises hiding under the hood, the car’s exterior won’t be too shocking when Audi reveals it. The camouflage hides many of the design’s details, and the overall styling sports some significant changes compared to the current car. The entire face looks narrower, including the grille and headlights. At the rear, Audi has installed stand-in taillights, though there’s not much excitement back here.

Audi has yet to set a debut date for the new A4, which will arrive in both Avant and sedan body styles. However, we expect a reveal to happen late this year or early next as the car should go on sale sometime in 2023. Audi is pushing toward becoming a fully electric brand, but gasoline engines have a place in its lineup for a few more years. For now, the rumors looks exciting, but nothing is official just yet.