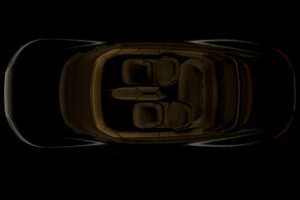 Audi has teased the first of its three new “Sphere” concept cars, which preview the brand’s design direction for the next decade and beyond.

This one’s called the Audi Grand Sphere, and Auto Express understands it is being lined up to be Audi’s star of the 2021 Munich Motor Show. When it arrives, it will preview an A8-replacing luxury limo that will be introduced in 2025.

Norbert Weber, Audi head of interior design, said: “The Grand Sphere is clearly much closer to reality [than the Audi Aicon concept]. Around the year 2025, we want to have a new offering in the upper luxury segment – and the Grand Sphere is definitely an outlook on that.

“Especially when you talk about design language, both interior and exterior, of course we want to bring as many elements of series production as possible.”

Philipp Römers, Audi’s head of exterior design, echoed his comments saying: “We have plans for electric cars in the D-segment in the coming years, so it may very well be that more than just a few details and lines will be reflected in the series production model. Audi does not just develop isolated show cars that have nothing to do with series production.”

Both of Audi’s designers also mentioned how the Grand Sphere represents a shift in automotive design, moving from the relatively small cabin space and large overhangs of a traditional car to a much more spacious interior thanks to shorter overhangs, made possible by the new electric underpinnings.

Audi’s vision for its future car interiors is for them to become an extra “living space” complementing the buyer’s home – and that lounge-like design attitude is evident in the Grand Sphere’s cabin.

The seats, for example, are lounger-like, while the dashboard is far more minimalist than any of Audi’s current production vehicles. The centre console also features a “refreshment area,” rather than the usual infotainment system controls or drive mode switches.

Römers made some key comparisons between the Grand Sphere and the Aicon concept from the 2017 Frankfurt Motor Show. He said: “The concepts of the cars are different worlds. But looking at the similarities, both are luxury class vehicles with a footprint of a long wheelbase A8, roughly, which means they’re both at home in the D-segment.

“The differences are that the Aicon was really geared towards autonomous driving on Level 5. The Grand Sphere will be Level 4 of automated driving, meaning the driver still has the possibility to actually drive the car himself – and this is something that we want to find evident in the exterior design.”

“So, cars from the B-segment, which is the size of an A4, up to upper class vehicles like the Audi Grand Sphere can use the PPE platform as its technical platform. And this is our plan.”

The PPE platform is an evolution of the J1 platform that underpins the Audi e-tron GT. It’s destined for use under cars such as the Audi Q6 e-tron and next-generation Porsche Macan electric SUVs.