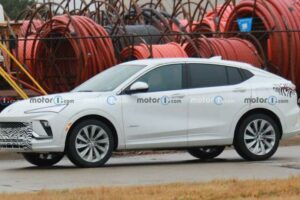 Buick has plans to add the Envista to its US lineup. It’s a mystery when it’ll debut, though we expect it to happen sometime this year. The crossover is already on sale in China, so its design isn’t a complete mystery. However, our eagled-eye spy photographers were able to capture the new model out testing in its top-tier Avenir trim that should be on its way to the US.

The Envista Avenir differs from the Envista our photographers captured last week. The Avenir sports chrome trim, which is most noticeable around the greenhouse and rear quarter-panel garnish. The crossover is also wearing camouflage, unlike its sibling.

The camo covers a portion of the front fascia, a sliver of the rear bumper, and the taillights. The grille and lower front fascias on the Avenir look unique, and we expect the rear bumper and taillights to have their own design touches. Another difference is the trim along the bottom. The Avenir’s is body-color, while the previous test vehicle has it in gray.

Powertrain choices are a mystery, but it uses a turbocharged 1.5-liter four-cylinder in China. The engine makes 185 horsepower (135 kilowatts), channeling power to the front wheels through a continuously variable transmission. The crossover can reach 62 miles per hour (100 kilometers per hour) in 7.9 seconds. The crossover could get a larger, 2.0-liter turbocharged four-cylinder for the US, giving the model more power in the competitive market.

The model’s cabin in China features a 10.25-inch infotainment screen and a digital instrument cluster. The Buick offers wireless charging, Apple CarPlay, and a 360-degree camera system, all of which should make their way to the US-bound model.

The Envista measure 186.2 inches (4,638 millimeters), which makes it 0.1 inches longer than the Envision. However, the Envision has a longer wheelbase – 109.4 inches (2,799 mm) versus 106.3 inches (2,700 mm). The Envision is also taller, making it a tad more practical than the stylish Envista. The crossover wears a new, sleek design language that should influence future Buick models. The crossover looks ready for US showrooms, so we hope a debut isn’t too far away.